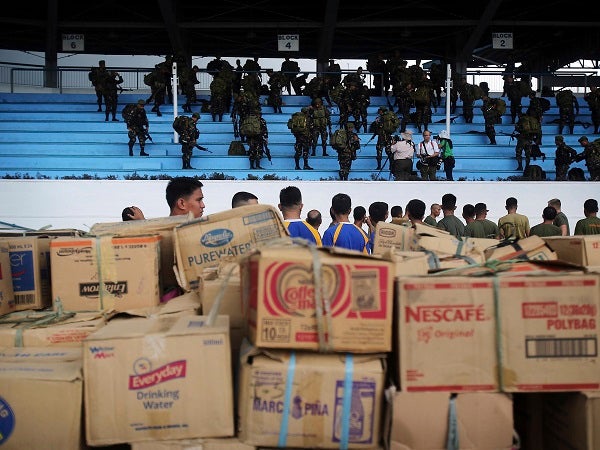 MANILA, Philippines—Spearheaded by a huge US mobilization, foreign relief operations are active on the ground in the Philippines after Supertyphoon “Yolanda” left thousands dead or homeless.

A week after Yolanda hit a belt of central Philippine islands, ships and planes from Asia-Pacific nations and Europe are converging on the country bearing food, water, medical supplies, tents and other essentials.

The international push comes as the United Nations admitted it had been too slow to reach the victims of the storm, with survivors still begging for help.

The United States, which used to rule the Philippines, is by far the greatest contributor to the effort with an eight-strong aircraft carrier group led by the giant USS George Washington.

Mercy flights from the George Washington were transporting food and supplies to the town of Guiuan, which was the first hit by the typhoon.

US servicemen are also unloading aid at Tacloban airport and appear to be operating autonomously from beleaguered Philippine authorities, who have struggled to safeguard the distribution of aid on the streets amid outbreaks of lawlessness.

Eight American MV-22 Ospreys—rotor planes that can take off and land like helicopters—have joined a team of Marines, who are equipped with amphibious vehicles and 12 cargo planes delivering food, water and other essentials.

In other contributions, Britain is sending its largest naval ship, the helicopter carrier HMS Illustrious. Also from Britain, heavy transport planes carrying equipment such as 4X4 vehicles and forklift trucks have already arrived.

Other C-130s—a warhorse of relief operations the world over—are being deployed by countries including India, Indonesia, Japan, Malaysia, New Zealand, Singapore, South Korea, Sweden, Taiwan and Thailand, as well as by UN agencies and private charities.

Other military transporters and aid flights have arrived or are en route from Belgium, Canada, France, Germany, Italy, the Netherlands and Spain, among others.

Hundreds of millions of dollars in cash contributions have been pledged worldwide, including from Gulf countries, where large numbers of Filipino expatriate workers live.

Financial support is also being provided, he said.

The Turkish government sent an Airbus 330 cargo carrier to the Philippines with 90 tons of aid material, including blankets, tents and kitchen equipment, in addition to food items.

The  Vancouver-based B2Gold Corp., a gold producer with three operating mines, including one in the Philippines, has also announced a $1-million donation for the “immediate rescue and relief efforts” in the affected areas.

B2Gold is the partner of Filminera Resources Corp., operator of the Masbate Gold Project, currently the largest operating gold mine in the Philippines.

In Bangkok, activists, singers and concerned citizens will perform a daylong musical recital at Central World on Saturday, to raise funds to help the typhoon victims.

The event, “Play for the Philippines,” will feature groups of part-time and professional musicians. They plan to serenade passers-by in hope of attracting donations for the cause. It will run from 10 a.m. till 8 p.m. at Eden Zone, on the ground floor of Central World department store. Reports from AFP, The Nation/Asia News Network

Aquino back to Ground Zero on Saturday