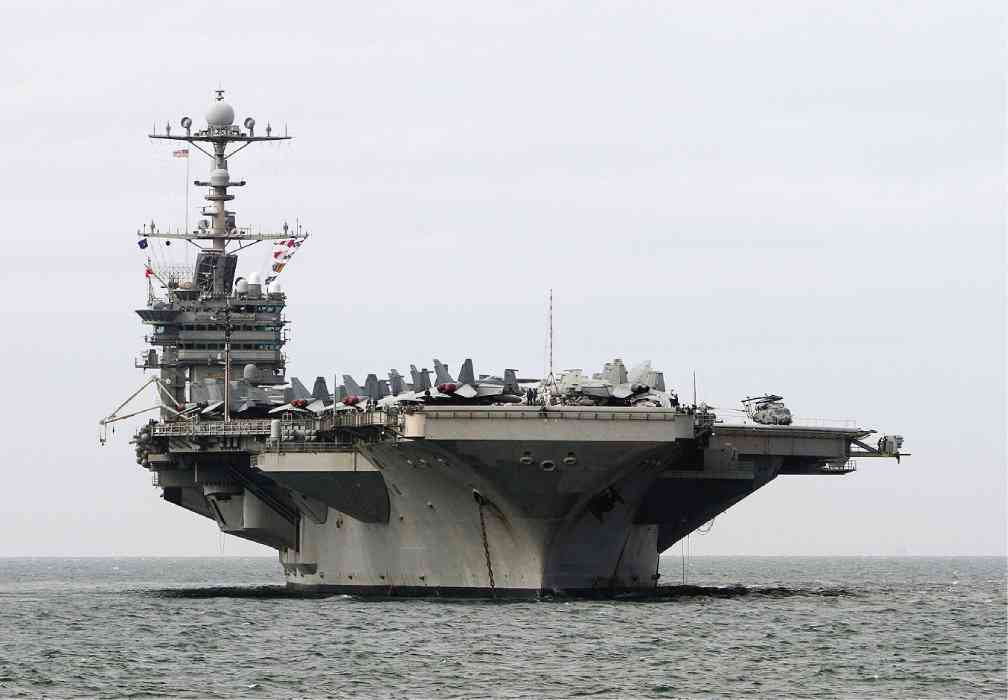 The carrier moved some fixed-wing aircraft ashore to make more room for the helicopters on its flight deck.

“One of the best capabilities the strike group brings is our 21 helicopters,” US commander Rear Admiral Mark Montgomery said in a statement. “These helicopters represent a good deal of lift to move emergency supplies around.”

US sailors have brought food and water ashore in Tacloban City and the town of Guiuan.

The carrier is moored near where US Gen. Douglas MacArthur’s force of 174,000 men landed on Oct. 20, 1944, in one of the biggest Allied victories of World War II.

Another US aircraft carrier, the USS Abraham Lincoln, led a massive aid operation off Indonesia’s Aceh province after the Indian Ocean tsunami in 2004.

On Thursday, the US military said it was deploying 1,000 Marines to support emergency relief operations in the country, with about 900 troops on two US Navy amphibious ships— the Japan-based USS Germantown and USS Ashland.

The ships are due in the Philippines in about six days, the US Marine Forces Pacific said in a statement.  An additional 100 Marines from the same unit will travel to the region by aircraft.

The ships were set to bring heavy engineering equipment—including backhoes, dump trucks and wreckers—as well as generators, “water bull” portable water tanks and amphibious assault vehicles, a tracked vehicle that can operate in water and on land.

Up to eight MV-22 Osprey tilt-rotor aircraft were also set to fly to Manila’s international airport in the coming days, doubling the number of Ospreys available in the area.

US officials yesterday noted an improvement in the distribution of aid in typhoon-stricken Eastern Visayas, even as US personnel worked to open new veins to ration supplies to the hardest-hit villages.

US Embassy and military officials in the Philippines said its air assets on disaster response missions here had flown 186 sorties as of yesterday afternoon, conveying relief supplies and emergency crews into Tacloban City and flying out survivors who had opted to move to Luzon.

Charge d’affaires Brian Goldbeck of the US Embassy in Manila said 10 US KC-130s and eight MV-22 Ospreys—tilt-rotor planes that can land and take off like a helicopter in areas without runways—had brought some 174,000 kilos of relief supplies into affected areas.

The American planes, deployed from the 3rd US Marine Expeditionary Brigade (MEB) in Okinawa, had also moved about 1,200 emergency workers into Tacloban and flew nearly 2,800 Filipinos and 109 American nationals out of the disaster areas.

Aid has been excruciatingly slow in coming, with the government blaming the crippled airport and roads still blocked with debris.

The death toll has become a matter of dispute between the United Nations and the government, with the world body saying 4,460 have been confirmed dead and the National Disaster Risk Reduction and Management Council insisting the number remained at 2,360.

The USS George Washington Strike Group—with 5,000 sailors on the huge carrier alone and seven other ships—arrived on Thursday with badly needed equipment, manpower and expertise, giving some hope to survivors that the delivery of aid would speed up.

“I will try to make it to the airport. But I have only eaten twice in five days and have drank rainwater collected in a plastic cup. I am so tired.”

At the Tacloban airport, US aircraft were coming in two at a time. American servicemen were driving trucks loaded with aid and appeared to be acting quasi-independently, with a large part of the airfield to themselves.

Hundreds of people were also standing in searing heat, trying to get on planes out of the stricken city.

Ships and planes from Asia-Pacific nations and Europe have been converging in the Philippines, bearing food, water, medical supplies, tents and other essentials.

Tacloban City Mayor Alfred Romualdez said he was “very grateful” for all the help. But on the city’s streets, the sense of want was gnawing for a population in dire need of the basics of life.

Alita Nabelga, 81, said water was starting to get through but there were no food or medicine.

“Where are the Americans? Are they bringing us rice?” she said hopefully.

At Tacloban City’s only functioning hospital without a roof, power or water, a woman frantically pumped air into the lungs of her husband, lying critically ill a day after his leg was amputated.

Valentina Gamba, the head of nursing at the hospital, said they had tried to discharge patients whom they could not feed.

“But they still stay for shelter… because they cannot go home,” Gamba added.

A US Embassy official said the air carrier’s strike group “is delivering supplies” but that the United States’ significant presence “was still under the direction of the Philippines.”

“What is critical is that we humanitarian organizations have good cooperation with the military … We have experience in places like Haiti, where there were some communication gaps,” he added.

Though aid has been forthcoming, dead bodies still lay by the side of the road on Friday.  The smell of rotten flesh still hung in the air; however, most had been put in body bags, ready for mass burial.

While the retrieval of the dead was ongoing, there were growing fears for the health of survivors.

The World Health Organization said there were significant injuries that had to be dealt with, including open wounds that could easily become infected in the sweltering tropical heat.

Experts also warned that a reliable supply of clean drinking water was vital to avoid diarrhea, which could lead to dehydration and death, especially among small children. Reports from Tarra Quismundo and AFP