We have let people down, says UN humanitarian chief 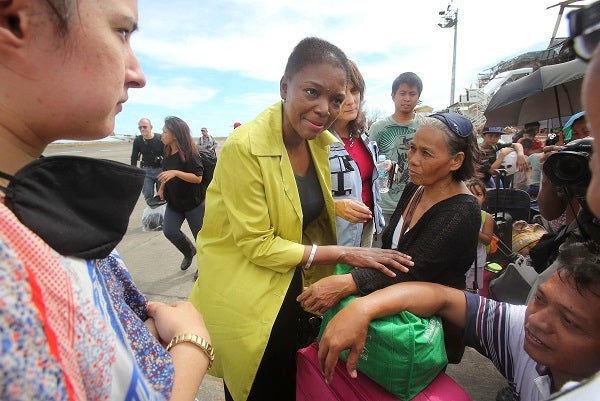 “The situation is dismal. People are extremely vulnerable and desperate for help. We need to get assistance to them now. Ensuring faster delivery [of aid] is our immediate priority,” Amos told a news conference in Manila.

“I think we are all extremely distressed that this is Day Six and we have not reached everyone,” Amos said. “I have people on the ground and they are personally concerned that they have not been able to get to people in need.”

Amos gave the assurance that relief delivery was being scaled up as the Philippine government, clearly overwhelmed by the scale of the devastation, deflected criticism over the slow pace of bringing life-saving assistance to typhoon victims nearly a week since the storm hit the country.

Briefing the press a day after visiting Tacloban, Amos spoke of the frustration of aid workers and even government officials over delays in aid delivery, citing several factors owing to the holdup—debris-clogged roads, bad weather, fuel constraints, lack of communication lines and the virtual lack of local government coordination—apart from the sheer scale of the calamity.

“I think the members of government feel exactly the same way, the mayor (Tacloban City Mayor Alfred Romualdez) feels exactly the same. He was speaking to me about the frustration he feels, the basic services he needs to provide his people [and] he has not been able to do it,” said Amos, observing that local officials themselves were typhoon victims.

“So, yes, I do feel we have let people down because we have not been able to get in more quickly. But at the same time, I can see and I was able to see yesterday that our operations are scaling up significantly,” she said.

Amos said aid workers “feel disappointed that we haven’t been able to do more despite the recognition of the fact that there are reasons for that.”

She acknowledged that aid had yet to get to other severely hit areas.

“There are still areas that we have not been able to get to, where people are in desperate need. And I hope that in the next 48 hours that will change significantly,” she said.

Luiza Carvalho, UN resident humanitarian coordinator in the Philippines, said bringing aid through air drops was being studied as a quicker method to send help to areas within Tacloban City that remained isolated.

She said the distribution of relief was the main problem as aid workers could not circulate in Tacloban’s debris-strewn roads.

Asked about reported incidents of looting, Carvalho said she was optimistic that the security threat could be dealt with soon with police and military deployments in the city.

“This is not hampering us. There are convoys going, there are airplanes coming. The situation is very localized,” Carvalho said.

“[W]e believe that we will be coming to normality very, very soon and be able to establish a continuous flow of aid,” she said.

Praveen Agrawal, World Food Program (WFP) country director in the Philippines, is also optimistic that aid delivery will improve in the coming days as access improves.

“Because access was so difficult, [aid delivery] was slowed down a little bit, I do admit that, but within what was done and the incredible challenges that the government has to face, I think we are now at a point where things will start rolling in the right direction,” Agrawal told the Inquirer in a separate interview.

Agrawal, who was among the first to see the devastation in Tacloban a day after the monster storm hit, recognized the need to assure typhoon victims that aid was coming their way.

He said the WFP would set up a telecommunications and logistics hub at the Tacloban airport soon to help in coordinating the response, in addition to supplies that the organization had so far brought to Eastern Visayas, including high-energy biscuits and rice.

The amount is apart from the $25 million (P1.075 billion) the United Nations has released for urgent assistance during the initial response.

Foreign governments have, meanwhile, been providing aid even before the UN flash appeal, so far pooling nearly P4 billion in emergency funding and in-kind donations.

Australia on Thursday announced a fresh allocation of A$20 million, or P820 million, on top of its earlier aid, raising its total assistance for Yolanda relief to A$30 million, or P1.2 billion.

Canada’s Globemaster C-17 cargo plane joined a growing air and sea fleet from different parts of the world converging on the Philippines for disaster response.

Aircraft and warships from the United States, the United Kingdom and Japan carrying relief goods, equipment and personnel have either landed or are on their way to the Philippines to provide assistance.

Cameron said the total amount of British government aid for the typhoon victims was now more than $32 million.—With a report from AFP

Read Next
Relief efforts promote US interests in Asia, say experts
EDITORS' PICK
Omicron variant detected in more countries as scientists race to find answers
Gov’t plans to open COVID-19 vaccination for 5- to 11-yr-olds by January 2022
A delightful blessing!
Villar Group gears up for AllValue Shopping Party on Dec. 3; around P 1-million promos and discounts up for grabs
Legarda: Ending Violence Against Women, a cause for all
Gov’t eyeing COVID-19 vaccine booster for essential workers, indigents by Dec. 10
MOST READ
Omicron poses ‘very high’ global risk, countries must prepare–WHO
Quiboloy warns of ‘much worse than Omicron virus’ if his ‘persecution’ is not stopped
Bongbong Marcos’ conviction in tax case not a crime involving moral turpitude — lawyer
Marcoleta defends pol ads on ABS-CBN
Don't miss out on the latest news and information.