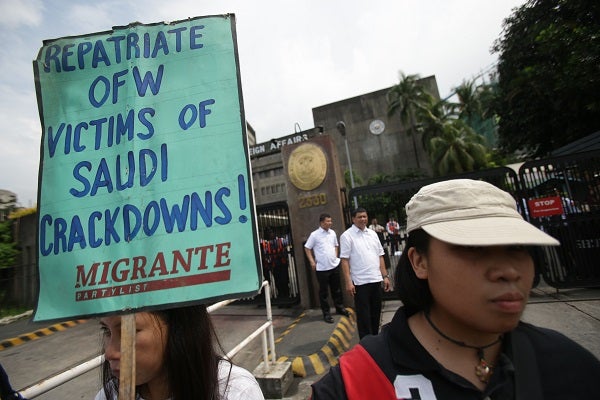 Filipino protesters hold banners outside the Department of Foreign Affairs in suburban Pasay on Nov. 4, 2013. The group urged the government to repatriate undocumented Filipino workers amid a Saudi Arabian government crackdown against foreigners working without permit in the Middle Eastern Kingdom. AP PHOTO/AARON FAVILA

JEDDAH, Saudi Arabia—Some 300 Filipinos have been camping outside the Philippine consulate in Jeddah for weeks waiting for documents and help to leave Saudi Arabia, as a crackdown on illegal migrants intensifies.

“I’ve been staying here for more than three weeks,” said Renato, 42, on Wednesday, as he sat on the pavement, outside a tent made of worn bed sheets.

He said he was waiting for the help from his consulate in Jeddah to obtain a Saudi exit visa, but also needed money to buy a ticket home.

“We can’t buy travel tickets, so we are waiting for our deportation,” he told AFP, as nearly a million illegal migrants took advantage of a seven-month amnesty and quit the kingdom.

Since the amnesty expired on Nov. 4, authorities have been rounding up foreigners who have stayed behind illegally and are holding them in special centers until their deportation papers are sorted.

Another roughly four million were able to find employers to sponsor them.

Among them were foreigners who overstayed their visas, pilgrims who had sought jobs, and migrants working under one sponsor trying to get jobs elsewhere.

Having an official sponsor is a legal requirement in Saudi Arabia and most other Gulf states.

Renato is one of those who had a sponsor and a valid residency permit, but worked for someone other than his sponsor.

“I couldn’t find another sponsor,” he said.

Among the rag tents sat Elie, his wife, Mati and their four-year-old son are waiting for exit documents.

“My son fell ill, and I still can’t find treatment for him,” he said.

Both had jobs, but they also had the wrong sponsor, so they had to leave after failing to legalize their status.

The Filipino consul general in Jeddah, Uriel Garibay, told AFP the mission is helping citizens get the documents they need “to facilitate their leave.” Many of those migrants have expired passports and need consulate identification papers.

There are around one million Philippine workers in Saudi Arabia.

Expatriates account for a full nine million of the oil-rich kingdom’s population of 27 million.

The lure of work, even in low-paid jobs as domestics or construction workers, has made the country a magnet for migrants from Asia as well as from poorer Arab states.

Despite its huge oil wealth, Saudi Arabia has a jobless rate of more than 12.5 percent among its native population, a figure the government has long sought to cut.