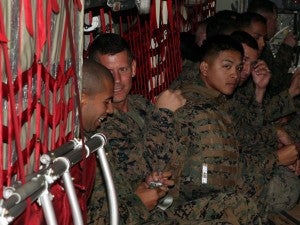 The US military’s relief efforts in the storm-ravaged Philippines will save lives, but also illustrate how humanitarian operations promote Washington’s interests in the Asia-Pacific region, experts said on Wednesday. AFP FILE PHOTO

WASHINGTON—The US military’s relief efforts in the storm-ravaged Philippines will save lives, but also illustrate how humanitarian operations promote Washington’s interests in the Asia-Pacific region, experts said on Wednesday.

These are seen as a strategic tool, allowing the United States to exert “soft power” through means usually tied to “hard power,” according to a report released on Wednesday by Ely Ratner of the Center for a New American Security, a think tank with close ties to the Obama administration.

“Having assets in the region allows the United States to provide aid assistance in ways that augment US leadership and legitimacy in Asia,” the report said.

The Pentagon’s version of “disaster diplomacy” evolved after the Cold War, with US officials adopting a broader approach to forging security ties with other states.

A pivotal moment came in 2004, when a massive tsunami in Asia led both Jakarta and Washington to set aside differences over human rights, permitting the US military to deliver major logistical aid.

“The scale and scope of that was so enormous and overwhelming that it really overrode the political tensions that had been building between the two countries and had kept relations at a low level,” said Michael Auslin of the American Enterprise Institute think tank.

The military aid effort, similar to the current elaborate operation in the Philippines, showed Indonesia that the Pentagon’s humanitarian help came “with no strings attached” and was truly “selfless,” Auslin told AFP.

The episode “helped put US-Indonesia relations on a completely new trajectory,” he said.

Defense ties with Indonesia gradually improved afterward, with cooperation on maritime security and peacekeeping. And in August, the Pentagon announced the sale of eight Apache attack helicopters to Jakarta.

US forces stepped in to assist Japan after that country’s 2011 earthquake and tsunami, steadying relations between the allies after strains over the American’s military’s presence on Okinawa.

The recent disasters are “tragedies that no one wants to happen,” but humanitarian operations and related exercises are also a way of cultivating trust, Auslin said.

“There are a lot of countries that want to have better relations with the United States but are wary of having an open alliance,” he said.

Taking part in humanitarian exercises offers a way to build ties with the US military without antagonizing China, he added.

Officials believe the disaster relief drills are also a way of opening the door to better dialogue with China’s army, which is taking part in talks in Hawaii this week focused on humanitarian operations.

In annual “Balikatan” exercises between the US military and the Philippines, the scenario in the past two years has been a disaster resembling the crisis now unfolding in the country, said a senior Marine Corps official.

“This is a classic example of why we need to be forward deployed and forward engaged, why we conduct theater security cooperation, why we establish these relationships,” the official, who spoke on condition of anonymity, told reporters.

Pursuing humanitarian assistance, including training and joint exercises, has been a “key priority” in Asia and elsewhere for Defense Secretary Chuck Hagel and his predecessors, said Pentagon spokesperson George Little.

“The speed with which US forces are able to respond to [Supertyphoon Yolanda] highlights the importance of the humanitarian assistance and disaster relief exercises we carry out regularly in the Asia-Pacific,” Little told a news conference on Tuesday.

The price tag for the relief missions is miniscule compared to combat operations, and the Pentagon in a budget document called them “low-cost, nonobtrusive and highly effective.”