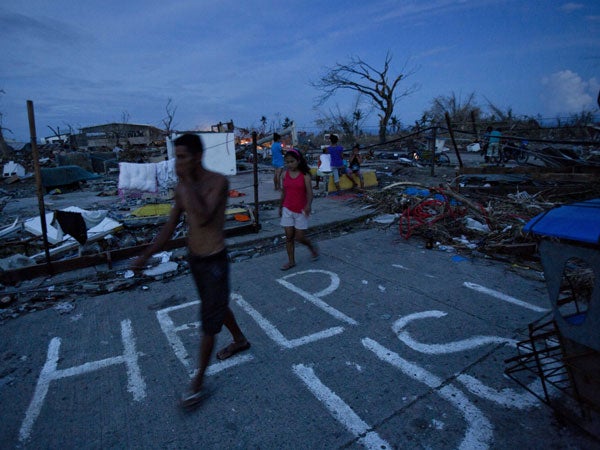 Supertyphoon “Yolanda” (“Haiyan”) survivors walk through the ruins of their neighborhood in Tacloban City on Wednesday, Nov. 13, 2013. A man named J.R. Apan painted a plea for help in front of his destroyed home the day after the typhoon hit hoping for aid to arrive but says he has not yet received food and water supplies. AP FILE PHOTO

It “will go to a position just off the eastern coast of Samar island in order to begin to assess the damage and provide logistical and emergency support to include medical and water supplies,” the carrier’s commander, Rear Admiral Mark Montgomery, said.

The USS George Washington was one of eight American ships in the region as part of “Operation Damayan” — Tagalog for “solidarity” — Montgomery added in a statement emailed to journalists.

He said cruisers USS Antietam and USS Cowpen would join the carrier off stricken Samar while the cargo ship USNS Charles Drew was moving water supplies to Guiuan airfield, elsewhere on the central island.

Two ships were bringing emergency supplies to Tacloban, the devastated capital of Leyte province, while another was focusing on Ormoc, on Leyte island.

“We have ships conducting a variety of missions,” he said.

The carrier’s arrival is expected to give the relief effort a much-needed boost, particularly as the US navy will bring its logistical know-how to bear on a chaotic situation that has left many without help almost a week after disaster struck.

Roads have been impassable and the aid that has arrived has been jammed at airports and in warehouses, its delivery complicated by a dicey security situation that has seen convoys attacked.