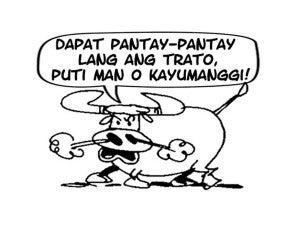 Survivors of Supertyphoon “Yolanda” and their families were not at all awed by the presence of the famous CNN news anchor and other foreign and local journalists who swooped down here to cover the catastrophe that hit central Philippines.

Cooper, host of CNN’s “Anderson Cooper 360,” was among the foreign journalists who covered the Aquino administration’s slow response to the crisis caused by Yolanda (international name: “Haiyan”).

But to many survivors, who had been waiting in vain to fly out of badly hit Tacloban City, in Leyte province, since Sunday, seeing foreign journalists going in and out of the city aboard C-130 military planes and private helicopters only deepened their anguish.

Others complained that relatives of local politicians and senior government officials were among the first ones who were accommodated in free flights out of the city.

CNN’s coverage of the government’s response to Yolanda was highly critical yet the Atlanta-based network received special favors from the government.

On Saturday, Filipino and foreign journalists on the second

C-130 cargo plane to land in Tacloban a day after the typhoon were asked to travel light to give more space to troops and aid workers.

On the plane was the military signal van that was urgently needed to establish communication in the Tacloban airport, which was heavily damaged during the storm.

Despite the request, the CNN crew brought aboard 100 kilos of equipment, the only news organization to bring that much cargo. Other journalists brought only basic equipment and overnight bags.

The GMA 7 crew carried heavy equipment, but they waited for the next C-130 flight to be able to bring their big load.

One CNN team on the ground also had Filipinos from a government agency under the Office of the President serving as babysitters to make sure the news team would get the stories it wanted.

On Monday, Malacañang press officers were seen at Ninoy Aquino International Airport in Manila awaiting the arrival of foreign journalists who would cover the disaster in the Visayas.

The press officers carried welcome banners of sorts—bond paper with the names of the journalists they were meeting printed in large fonts.

CNN nearly missed President Aquino in Tacloban on Sunday, arriving just before he boarded his vehicle.

The Inquirer learned that somebody informed CNN of Aquino’s presence, and the crew rushed to catch him.

Obviously, somebody also told the President that CNN was there and wanted an interview. Instead of taking his car, he stopped to meet the CNN team, prompting the other journalists to run to where they were to catch the interview.

For CNN, Malacañang ignored the procedures it imposes on the press during presidential engagements.

Travelers to Tacloban were angered by the special accommodation given to the foreign journalists.

“Why are foreign journalists being prioritized over us? Do they have relatives missing in Leyte?” asked Narcisa Arias, who had been waiting for a C-130 flight from Mactan Cebu International Airport in Lapu-Lapu City since Sunday.

“The military or whoever is in charge of facilitating the flights should have been more sensitive to what the relatives of missing typhoon victims feel,” she told the Inquirer in the vernacular on Tuesday.

Told that Cooper, who reportedly flew in on a chartered flight, was in Tacloban, the 61-year-old sounded perplexed.

“Who is he? Can he help me find my mother and two brothers?” Arias asked.

A woman, who was in her 20s, butted in and told Arias that Cooper was a well-known journalist.

“Then maybe he can tell the world how inutile and cruel this government is. We have been here for three days and yet the military let others board the C-130s,” Arias said.

Bertrand Zand of the German newsmagazine Der Spiegel said that although he sympathized with the survivors and their relatives, keeping journalists out of Tacloban would not do them any good.

“I can very well understand them. I probably would have reacted the same way. But in a way, we’re just doing our jobs. Aren’t we?” Zand said.

Instead of limiting the movement of journalists, he said, the government should make available ships and additional military planes for the typhoon victims.

Brian Goldbeck, the US Embassy charge d’affaires, lauded the journalists for braving the miserable situation in typhoon-ravaged communities in the Visayas to get the attention of the world.

Goldbeck flew in from Manila to ensure the swift distribution of relief provided by the US government.

“I really appreciate you guys being down here. The job that you have as reporters is very important to be able to understand the state and extent of the problem and helping us to find ways to get the help out to the people,” Goldbeck told reporters.

Besides wearing their hats as journalists, Filipino and foreign journalists were also seen sharing water and food with typhoon victims.

Fatima Estrope, who traveled from Nueva Ecija province to look for her missing parents and her four younger siblings, showed her disgust on seeing a group of foreign journalists making a beeline for a “humanitarian flight” offered by a local airline.

“I thought this was a humanitarian flight? Why are we being treated inhumanely?” Estrope, a nursing student, said.

On Wednesday, the Inquirer saw Arias in one of the long lines of people outside the Tacloban airport.

She said she had found her mother, two brothers and their families who all survived the typhoon’s wrath.

“You know, I saw Anderson Cooper a while ago. You didn’t tell me he’s handsome,” Arias said, chuckling.

“I’m sure he had seen the bodies still scattered all over the streets of Tacloban. I hope he could also do a report about this,” she said, referring to the chaotic lines of typhoon survivors at the airport.—With a report from Tarra Quismundo