Obama calls on US to aid storm-ravaged Philippines | Global News

Obama calls on US to aid storm-ravaged Philippines 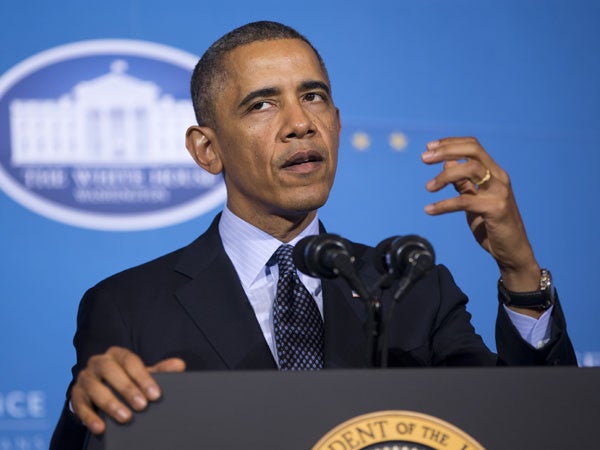 Obama bemoaned the “awful destruction” of the typhoon, one of the most powerful on record, and directed Americans to the White House website where they could link up with aid organizations working to alleviate the suffering.

“Our thoughts and prayers continue to be with the people of the Philippines as they mourn so many loved ones and neighbors lost in the awful destruction of Typhoon Haiyan,” Obama said.

“The friendship between our two countries runs deep, and when our friends are in trouble, America helps,” Obama said in a statement.

“With so many families and communities in the Philippines in urgent need of food, water, shelter and medicine, even small contributions can make a big difference and help save lives.”

US officials, meanwhile, voiced optimism that American assets including cargo planes and versatile Osprey aircraft would help bring help to victims still cut off by the storm.

US ships steaming to PH

The USS George Washington carrier and other Navy ships are steaming toward the ally and Washington has committed $20 million, roughly half for food and the rest to prevent diseases in the wake of the Typhoon.

“I would say we are cautiously optimistic that we are starting to turn a corner on some of the logistics challenges,” a US official told reporters on a conference call.

The Philippines faced a daunting task after the typhoon struck last week, with supplies piling up at the small airport in the flattened city of Tacloban.

The official said relief workers were now able to get more aid out of the airport and that the opening of a land route has provided a significant boost by connecting to a port.

“We are cautiously optimistic that that will be a pretty significant game-changer,” he said.

The initial effort was “a lot like trying to squeeze an orange through a straw. We are now getting more straws, if you will, and bigger straws,” he said.

Another US official said “over 1,000” American troops could be on the ground by the end of the week, up from around 300.

The US Marines Corps said four MV-22 Ospreys have left the US Futenma base in Japan, expanding the number of Osprey aircraft involved in the emergency work to eight.

The Osprey can land and take off like a helicopter but fly at the speed of an airplane, covering four times the distance of a traditional chopper.

Eight MC-130 cargo aircraft, a variant of the Hercules plane, also were deployed to reinforce the relief operation for victims of Typhoon Haiyan, increasing the fleet of cargo planes to 12 to help with deliveries of food, water and other emergency items.

As of Tuesday, a team of US Marines already on the ground has delivered 129,000 pounds (nearly 60 metric tons) of relief supplies for the effort dubbed “Operation Damayan,” or “Help in Time of Need.”

The USS George Washington escorted by two cruisers and a destroyer comes with 11 helicopters as well as dozens of planes and the capacity to desalinate large volumes of water.

Another American destroyer and a supply ship were en route to the disaster zone and two amphibious ships, the USS Germantown and the USS Ashland, set off Tuesday from the port of Sasebo in southern Japan.

The Germantown and the Ashland are equipped with landing craft and amphibious vehicles, medical facilities and desalination systems.

Another amphibious ship, the USS Denver, remains on standby in Sasebo for deployment, a Navy official said.

According to UN estimates, 10,000 people may have died in the typhoon and nearly 10 million people—or 10 percent of the Philippines’ population—have been affected.