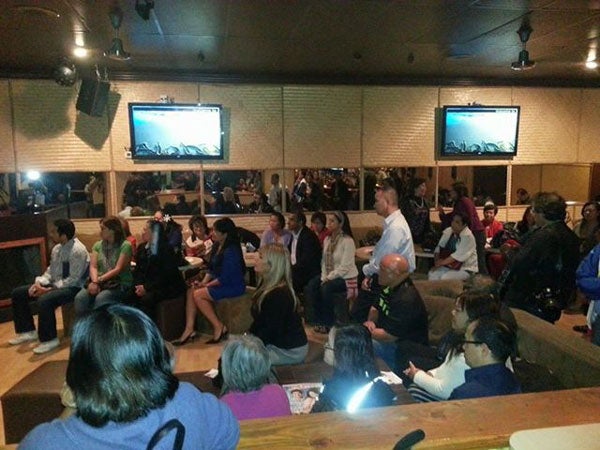 Filipino-American and other groups plan fundraiser for victims of Supertyphoon “Yolanda” Monday night in an event widely covered by the Las Vegas media. PHOTO BY EVAN LOUIE.

LAS VEGAS—Charities and nonprofit groups in this city, home to a large Filipino-American community of about 100,000, pledged support for the victims of Supertyphoon “Yolanda” that hit the islands nearly a week ago.

At a meeting Monday night, Nov. 11, at the Aloha Kitchen on Decatur Avenue and Sahara Boulevard, about 50 people, representing various local groups and charities, including from the Jewish, Indian and Chinese communities vowed to raise funds to meet the immediate needs of the people displaced by the storm.

As many as 10,000 people were feared killed by the typhoon, considered one of the strongest on record, which hit a wide swath of the Visayas, with an estimated 11 million people affected.

“Our hearts and prayers go out to all the people of the Philippines impacted by this natural disaster,” said Dr. Hugh Bassewitz, chairman of the board of directors of the Jewish Federation of Las Vegas.

“Our federation is joining others from across our nation to do whatever we can to help the Filipino people who are suffering and in need of assistance,” Bassewitz said.

His group announced an initial commitment of $15,000 in relief funds, with plans to raise even more.

Another attendee, Desiree de Castro, vice president of operations at Origin India Restaurant and Bar, donated $1,000 on behalf of the restaurant. She hoped that would help kick off the fund-raising, she said.

Judge Cheryl Moss, a family judge with the Eighth Judicial District of Nevada, said she attended the meeting to show her support and solidarity with the effort to help the typhoon victims.

Moss, who spent part of her childhood in the affected areas in the Visayas, said she believed many of her relatives were directly on the part of the storm.

“This is a very personal event for me,” she said. “Being a judge, I don’t really like to talk about my personal life. But I had to come out and show my support.”

Like many Filipinos with relatives in the affected area, she has not heard from them in the past several days.

“I’m just trying to stay very hopeful, say a lot of prayers, and hope I hear from them,” Moss told a reporter.

In an event widely covered by the local media, including several television stations, several Filipino-American organizations were on hand to plot moves to assist the victims in the affected areas.

Among them were the Filipino American Chamber of Commerce of Greater Nevada, the Philippine-American Lions Club of Las Vegas, the charity Feed the Hungry and a local group of musicians and entertainers called the Jabbawockeez.

“We cannot just sit here and do nothing,” said Ron Cabildo of Definitive Talents. “We have to do something.”

The musicians and entertainers are talking about holding fund-raising concerts while other groups, like the Philippine-American Lions Club, are thinking about creative ways to make money, like garage sales.

Kate Torres-Recto, the Lions club president, said they are holding a series of garage sales, weekly if possible, to raise money.

The first garage sale will be held Saturday and Sunday, Nov. 23 and 24, on Durango and Morning Side, near Dessert Inn.

She said she is coordinating with a group of doctors in the Philippines to assist the typhoon victims, especially children.