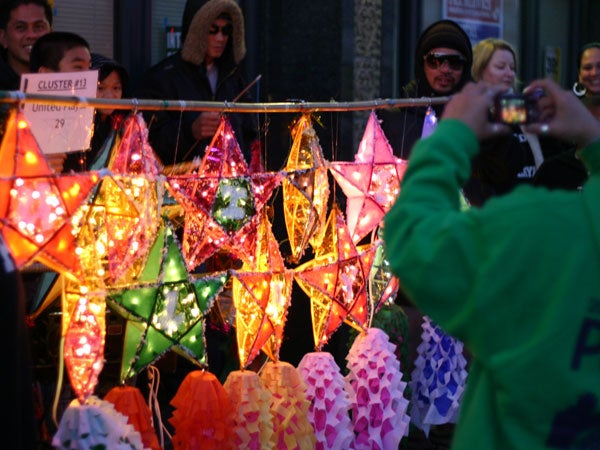 SAN FRANCISCO—The sight of devastation and ravaged brought about by the supertyphoon Yolanda (Haiyan) is seen around the world, happening at time when Christmas carols are already heard over the radio and local folks are preparing for the holiday season.

It is the time of the year again, when the Filipino community starts making parol lanterns and holiday decor to adorn their houses for the yuletide season. Every year Christians re-enact the Nativity, which includes the star of Bethlehem, symbolized by the parol, or the Filipinos’ traditional Christmas lantern.

Hanging the parol on front windows during the holiday season encourages other people to feel that they are not alone—“hindi ka nag-iisa”—and that “we are one in faith and identity.”

The theme of the 11th annual Parol Lantern Festival and Parade in San Francisco is “Enlightenment for All–Liwanag para sa Tanan.”

The festival begins with a series of  free parol lantern-making workshops held at the Bayanihan Community Center on 1010 Mission Street and Sixth Street in San Francisco, every Friday from 5:30 to 9 in the evening. Parol workshops are open to the public.

Every year contingents gear up for the annual event in San Francisco for the festive stroll to display their lanterns, which are creatively produced by their members and to vie for the esteemed Tala Award Grand Prize.

The Parol Festival and Parade is scheduled on Saturday, December 14, from 5 to 9 p.m. It is a family fun-filled evening of music, games and prizes with the brightly lit and colorful parol lanterns.

The Parol Festival is now one of the much awaited and a must-see events in San Francisco during the holiday season.  It is presented by the Filipino American Development Foundation and KulArts, in partnership with the Yerba Buena Gardens Festival, MJM Management, and St. Patrick’s Parish.

ADVERTISEMENT
Read Next
Obama calls on US to aid storm-ravaged Philippines
EDITORS' PICK
Current dominant strain of COVID-19 more infectious than original—study
Water remains our saving grace right now
EuroMillions Superdraw: A lottery draw unlike any other is coming to the Philippines
DOLE: Return of OFWs’ remains from Saudi to be ‘delayed,’ deadline moved to ‘early next week’
Smart releases Hyun Bin’s second TVC
‘Justice will be done,’ Duterte assures as he vowed probe on Jolo incident to bare ‘truth’
MOST READ
Duterte tells military: No other president looked at you the way I did
Locsin warns of ‘severest response’ if China’s army drills in SCS ‘spill over’ to PH domain
Man who stole 2 cans of luncheon meat lands in jail in Manila
VP Leni Robredo: ‘Remember, you were made for these times’
Don't miss out on the latest news and information.