World set to heat up despite clean-energy efforts—IEA 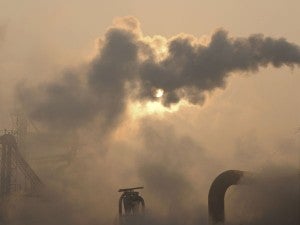 PARIS—Global warming is set to heat up with temperatures rising to nearly twice targets set by the United Nations, the International Energy Agency warned on Tuesday.

This is despite pushes towards energy efficiency and a raft of international pledges to curb global warming, the IEA said.

Greenhouse gas emissions will rise by 20 percent by 2035, putting the world on track for a temperature increase of 3.6 degrees, far above the UN target of 2.0 degrees.

In the past, the IEA has said that the world temperature would shoot up by six degrees if all efforts to limit human-based emissions were abandoned.

The IEA’s forecast of a 3.6-degree rise in global temperatures, came just as nations launched a new round of talks in Warsaw for a 2015 deal to cut Earth-warming greenhouse gas emissions.

The global energy sector is responsible for two-thirds of global greenhouse gas emissions and whatever trends emerge in the coming years will be pivotal to determining whether climate change commitments are met, the Paris-based International Energy Agency said.

But in its annual report on long-term trends in the sector, the agency said that the increase was to be expected despite a substantial rise in energy efficiency and usage of renewable energy.

The agency is the energy policy arm of the Organisation for Economic Cooperation and Development which advises 34 advanced democracies on policies.

The IEA praised recent initiatives in many of the world’s biggest economies to curb carbon emissions, which all had the potential to effect change, it said.

But despite the best efforts, climate-changing energy consumption was still on a sharp rise.

In its long-term forecast, the agency said that global demand for oil would hit 101 million barrels per day, a rise of 14 mbd in less than a quarter of a century. This ocean of oil is the equivalent to about 16.1 billion litres of oil being burned every 24 hours.

The use of coal meanwhile, which is the worst performer when it comes to carbon emissions, will rise by 17 percent between now and 2035, primarily because the fossil fuel remains far cheaper than the cleaner but harder-to-ship natural gas.

Any prospect of reversing the continuing increase in the use of coal depended mostly on China, the world’s biggest energy consumer, which burns as much coal every year as the rest of the world combined.

In the report, the IEA was sceptical about the benefits of stocking carbon, which had once been seen as a possible solution to the inexorable rise of greenhouse gases.

The IEA said the technology was unwieldy and too expensive, and that only one percent of energy producing plants would include it in 2035.

The use of nuclear energy will rise despite a recent slowdown, the IEA said, with demand being led by China, South Korea, India and Russia.

The one silver lining for those worried about climate change is renewable energy, especially electricity. The agency believes that by 2035, one third of electrical energy will be generated from renewable sources, led by solar and wind power.

With the economy still very much a priority for governments since the worst of the financial crisis, the IEA insisted tackling climate change did not necessarily mean sacrificing growth.

It repeated several suggestions on how countries can overhaul their energy sector to greener norms without destabilising the overall economy including embracing efficiency and scaling back fossil-fuel subsidies.

The UN has set a target of limiting global average warming to two degrees Celsius (3.6 degrees Fahrenheit) over pre-Industrial Revolution levels — at which scientists believe we can avoid the worst effects of climate change.

The talks and the IEA’s gloomy foreact come just as the world comes to grips with the aftermath of the devastating typhoon in the Philippines with over 10,000 people feared dead.

Scientists say the frequency storms of such murderous power will only increase with the rise in the earth’s temperature.—Marc Preel