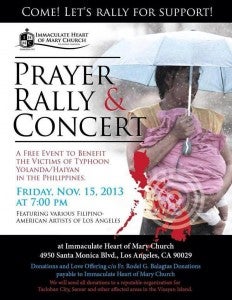 LOS ANGELES—Philippine Ambassador to the US Jose L. Cuisia, Jr. appealed to the Filipino American community to extend as much assistance as possible to the less fortunate people in the Philippines affected by Typhoon Yolanda.

“I know our Filipino American community has always been very generous. Now is one of those times to assist,” Cuisia told attendees at the 2013 Bi-National Conference of the Federation of Philippine-American Chambers of Commerce, held here over the weekend.

Filipino Americans in Southern California have been actively marshalling aid even before the ambassador’s appeal.

“I was able to raise $5,000 in a few hours for typhoon victims,” said Gina Alexander, CEO and fashion bag designer of Gina Alexander Inc. and an avid donorr to Luzon based orphanages. “People want something they believe in and make sure part of what they spend goes to a cause that helps them or others.”

On the ground, FilAms went for a five-kilometer walk fundraiser in Van Nuys, California, organized by the Philippine Disaster Relief Organization.

Filipino American artists are holding a prayer rally and concert benefit for Yolanda victims on Friday, Nov. 15 at the Immaculate Heart of Mary Church in Los Angeles.

United Methodist Churches in Los Angeles County are gathering funds for the calamity. “We are concerned about acts of justice, such as a sustainable livelihood. The poor cannot afford to build strong houses and live in a safer environment,” said, Rev. Nestor Gerente of Grace United Methodist Church in Long Beach.

“We want the people of Tacloban to get out and relocate temporarily to safer places,” said Theresa Canete, member of Taclobanon Association of Southern California.

“Some members of our Association have parents who drowned from the Typhoon’s rising water,” added Canete. “My father survived the typhoon and walked 20 miles to the airport to wait for relief assistance.”

Meanwhile, Rep. Edward Royce, Chairman of the Committee of Foreign Affairs, said, “We are working with the The Filipino American Chamber of Commerce to nationally encourage trade, investment, and reform and will try to help support the Philippines during this time of need.”

The Philippines loses an average of $1.6 billion annually, but losses from Typhoon Yolanda is estimated at approximately $12 billion, or about 5 percent of the nation’s economic output.

“President Aquino has initiated some reforms and I’ve seen the transformation through index ratings, but a lot more has yet to be done at the local level with some of the anti-corruption issues and initiatives which is important,” added Royce, who is working on an anti-trafficking bill.

Terrie Cervas, a Filipino Migrant Center Board Member, said, “This calamity is part man-made, due to misappropriation of public funds by government officials to improve and build up infrastructure.”

The Visayas and Mindanao region has had the highest rate of deforestation and annual relief efforts due to floods and droughts, massive erosion, loss of topsoil, landslides and silted streams.

“The energy that is stored in the waters off the Philippines will increase the intensity of typhoons and the trend we now see is that more destructive storms will be the new norm,” stated Philippines lead negotiator Yeb Sano to the UN climate summit in Warsaw.

“When someone asks you to do the right thing, guilt should be enough to tend to the needs of the Filipino community,” said California Senator Leland Yee.