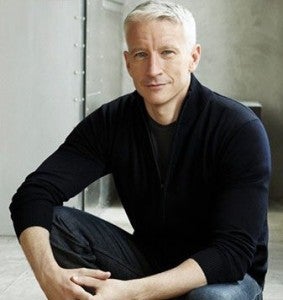 Going “beyond the headlines,” popular American newscaster Anderson Cooper arrived in Manila on a Korean Air flight on Monday night to anchor CNN’s live special coverage of the aftermath of Supertyphoon “Yolanda.”

The host of “Anderson Cooper 360°” was with a throng of high-caliber anchors and reporters of global media networks that began to descend on the capital since Monday to report on the worst natural disaster to hit the Philippines.

Cooper, who came with a three-person TV crew, was scheduled to fly to the devastated city of Tacloban in Leyte but was prevented from leaving due to Tropical Depression “Zoraida.”

His associates are Mary Anne Fox, Neil Hallsworth and Kari Pricher, according to Gilbert Lopez, a senior media accreditation and relations officer of Malacañang. Lopez picked up the team at Ninoy Aquino International Airport.

Britain’s Sky News and Moldova’s IPN News Agency have also sent teams to cover the massive relief, rescue and recovery efforts being led by the national government and international donors in the Visayas.

Christiane Amanpour, host of CNN International’s nightly interview program “Amanpour,” might have beaten Cooper and his team to the draw. She had already interviewed President Aquino via a phone-patch call on Tuesday.

CNN has been at the forefront of the news coverage of Yolanda (international name: Haiyan) before it even made landfall on Thursday. On Friday, it canceled regular programming to give way to a special coverage of the typhoon.

Its reporters, Andrew Stevens and Paula Hancocks, were already in Tacloban before the typhoon struck.