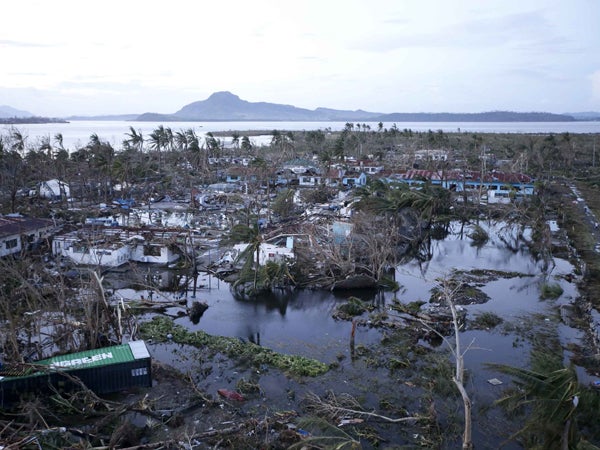 Tacloban city, devastated by powerful Typhoon Haiyan, is seen in Leyte province, central Philippines Saturday, Nov. 9, 2013. The central Philippine city of Tacloban was in ruins Saturday, a day after being ravaged by one of the strongest typhoons on record, as horrified residents spoke of storm surges as high as trees and authorities said they were expecting a “very high number of fatalities.” AP

TACLOBAN CITY, Philippines—The UN launched an appeal for a third of a billion dollars on Tuesday as US and British warships steamed towards the typhoon-ravaged Philippines where well more than 10,000 people are feared dead.

Festering bodies still littered the streets in many areas, with the smell of rotting flesh hanging in the air and ramping up the fear of disease in the tropical heat.

Increasingly desperate survivors begged for help that was having difficulty reaching them — many still without access to food and water after nights spent in the open.

“We are certainly expecting the worst. As we get more and more access we find the tragedy of more and more people killed in this typhoon,” UN humanitarian operations director John Ging said, after Philippine President Benigno Aquino declared a “state of national calamity”.

The United Nations warned 10,000 people were feared dead in just one city, Tacloban, the provincial capital of Leyte province where five-metre (16-foot) waves flattened nearly everything in their path as they swept hundreds of metres inland.

Nearly 10 million people, or 10 percent of the Philippines’ population, have been affected, while 660,000 have lost their homes, the UN estimated as it launched a flash appeal for $301 million.

“I very much hope our donors will be generous.”

Amos praised the international community’s reaction since Haiyan slammed into the Philippines on Friday, but said much more needed to be done in a disaster of almost biblical proportions.

“We have already seen an international and generous response given the horrific pictures that people have seen, particularly on their television screens,” she said.

Overwhelmed and under-resourced rescue workers have been unable to provide desperately needed food, water, medicines, shelter and other relief supplies to many survivors, and desperation has been building across the disaster zones.

“There is nothing here left for us. Our house is gone, we don’t have any money, we don’t have our documents, passports, school records,” Carol Mampas, 48, told AFP at Tacloban’s destroyed airport as she cradled her feverish baby son in a blanket.

“Please, please, tell authorities to help us. Where is the food, where is the water? Where are the military collecting the dead?”

Bodies still litter the wreckage, while security concerns are growing as gangs take advantage of a security vacuum to loot homes and businesses.

The government announced a night-time curfew for Tacloban and deployed special forces across the ruined city to try to prevent pillaging.

Heavy rain overnight in Tacloban compounded survivors’ desperation, while a tropical storm to the south threatened other typhoon-hit islands where hundreds of other people were also killed.

An international relief effort has begun to build momentum, with the United States and Britain announcing they were sending warships carrying thousands of sailors to the Philippines.

The aircraft carrier USS George Washington, which has 5,000 sailors and more than 80 aircraft aboard, headed from Hong Kong to the United States’ close Asian ally on Tuesday.

Five other US warships are also being deployed, and the carrier group is expected to reach the Philippines within two to three days, the Pentagon said. Dozens of US marines arrived in Tacloban on Monday as an advance team.

A British warship, currently in Singapore, would head “at full speed” to the Philippines, Prime Minister David Cameron announced on Monday.

Many other countries have pledged help with even China, which has been embroiled in a bitter territorial dispute with the Philippines, offering aid and sympathy.

The UN children’s fund UNICEF said a cargo plane carrying 60 tonnes of aid including shelters and medicine would arrive in the Philippines Tuesday, to be followed by deliveries of water purification and sanitation equipment.

“In the coming days, be assured: help will reach you faster and faster,” he said in a televised address.

“My appeal to you all is: remaining calm, praying, cooperating with, and assisting one another are the things that will help us to rise from this calamity.”

Haiyan’s sustained winds when it hit Samar island, where it first made landfall, reached 315 kilometres (195 miles) an hour, making it the strongest typhoon in the world this year and one of the most powerful ever recorded.

The official government death toll stands at 1,774, although authorities have admitted they have not come close to accurately assessing the number of bodies lying amid the rubble or swept out to sea.

The Philippines is hit with an average of 20 tropical storms or typhoons a year, as they emerge from the Pacific Ocean and sweep west.

However Haiyan’s record intensity has fuelled concerns that climate change is increasing the ferocity of storms.

Blaming global warming for Haiyan’s mega-strength, Philippines negotiator Naderev Sano pledged at UN climate talks in Warsaw on Monday to fast until progress was made on tackling the environmental crisis.

If the death toll of more than 10,000 is correct, Haiyan would be the deadliest natural disaster ever recorded in the country.

A weakened Haiyan hit Vietnam and China on Monday. At least seven people were reportedly killed in China.