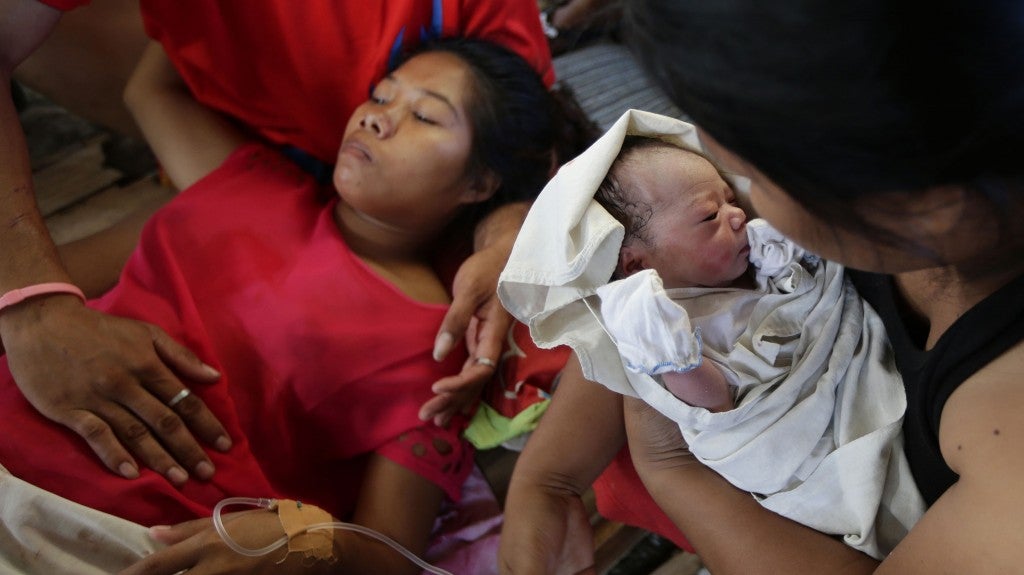 In this Monday, Nov. 10, 2013 file photo, newborn baby Bea Joy is held as mother, Emily Ortega, 21, rests after giving birth at an improvised clinic at Tacloban airport in Tacloban City. The United Nations Children’s Fund has announced that it was rushing emergency supplies to areas of the Philippines ravaged by Supertyphoon “Yolanda,” mindful of latest estimates that up to 4 million children could be affected by the disaster. AP PHOTO/BULLIT MARQUEZ

MANILA, Philippines—The United Nations Children’s Fund (Unicef) has announced that it was rushing emergency supplies to areas of the Philippines ravaged by Supertyphoon “Yolanda,” mindful of latest estimates that up to 4 million children could be affected by the disaster.

Therapeutic food for children, health kits, water and hygiene kits to support up to 3,000 families in the affected areas have been mobilized from supplies available in the country, with distribution prioritized for Tacloban City, Unicef said.

“We are rushing to get critical supplies to children who are bearing the brunt of this crisis,” Unicef Philippines representative Tomoo Hozumi said in a statement. “Reaching the worst affected areas is very difficult, with limited access due to the damage caused by the typhoon to infrastructure and communications. But we are working around the clock to find ways to get these supplies to children as quickly as conditions allow.”

Unicef’s warehouse in Copenhagen is airlifting $1.3 million worth of additional supplies for another 10,000 families, including those affected by the recent earthquake in Bohol. The shipments contain water purification tablets, soap, medical kits, tarpaulins and micronutrient supplements.

Children who escaped the terrible damage inflicted by Yolanda still need urgent assistance to survive its aftermath, Unicef said. Particular concerns include health, due to the impact of the typhoon on water supply and sanitation systems. Children also need safe and protected spaces to be able to play and resume studying while adults work to recover their homes and livelihoods.

“As we get a better picture of the impact of this devastating crisis, it is clear that even more children are affected than first thought,” Hozumi said. “Unicef is doing all it can to reach these children as quickly as possible with critical supplies, to protect their health, safety and well-being in the difficult days ahead.”