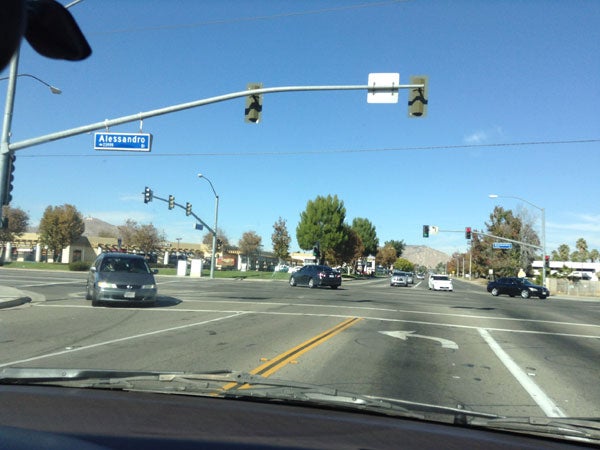 LOS ANGELES—Filipino-American community members of Moreno Valley, an incorporated city 60 miles South of Los Angeles, preferred to strike a low profile after recently seeing news that one of their own admitted taking a $2.3 million payoff in what is believed to be the largest-ever bribe accepted by a public official in the US.

On Tuesday November 5, the Press-Enterprise news reported that former Moreno Valley councilman Marcelo Co, who resigned his council position this summer due to an unrelated case, was accused of taking a $2.3-million bribe from an undercover FBI agent in January, in exchange for favorable support in city council land-use votes.

Co agreed Tuesday to plead guilty to one federal bribery count and one federal count of filing a false corporate tax return, the US Attorney’s Office for the Central District of California announced.  Earlier in August, Co resigned upon his arrest to face charges of allegedly defrauding the government with illegal home health expenses for his mother.

A council-manager governs the city, which is divided into five districts, and residents of each district elect a representative. The council chooses two of its own members to serve as mayor and mayor pro tem.  Co had served as mayor pro tem, who acts as mayor in his/her absence.

Inquirer.net contacted a number of Fil-Am residents of Moreno Valley on the phone, including a former Filipino association president and several Filipino restaurants, an insurance agent and a beauty salon owner, but they were either unavailable or unwilling to comment on the Marcelo Co case. The exceptions were a Filipino restaurant owner and a Filipina interior design consultant.

One responder said she became aware of the Marcelo Co case when they saw him on the local Channel 9 news and recognized him because he was a frequent customer in their restaurant.

“There’s not much impact among Filipinos here in Moreno Valley, and we don’t really dwell on it. We don’t discuss even the Napoles case in the Philippines, what more Marcelo Co,” the female responder said. She declined to be identified.

Southland Filipinos are most familiar with Moreno Valley on their way to favorite Indian casino haunts using Freeways I-10, I- 5 or I-60.  “My friends and I drive by Moreno on our way either to Morongo Casino or Harrahs,” said Evangeline Rodriguez, an interior designer and photographer from Northridge.

“It’s unfortunate that a kababayan got caught in an illegal scheme; that’s a sad commentary about Filipinos in mainstream politics, even though he doesn’t represent us all,” she said. 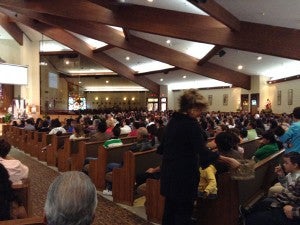 St. Christopher Parish Church, where Fr. Joven Junio officiates, has a congregation of 11,000 where Hispanic and Filipinos make up the majority. Churchgoers interviewed were not aware of the bribery scandal or wouldn’t want to talk about it. PHOTO BY CECILE OCHOA

A review of bloggers on Co’s case did not produce a whole lot of comments except for two who wanted to find out his political affiliation, whether he’s a Democrat or a Republican. Moreno is very red (Republican), said one blogger, “so I’ll not be surprised if he is a Republican.”

According to city demographics, Filipinos make up two percent of the city’s total population of 192,946. There are half a dozen visible Filipino restaurants and markets concentrated on Allesandro Street, where 2.4 percent of the residents have Philippine roots. These businesses include Fil-Am Enterprises, P.I. Market, Banig Restaurant, Red Ribbon, Asian Imports and P.I Grill.

“Our city is very diverse, but the Filipino demographic is quite obvious along Allesandro and in one church, St. Christopher Catholic Church,” said Robert Basso, a longtime resident of the city and a mediator for the US Post Office.  The current pastor of the church is a Filipino, Father Joven Junio. The church’s website showed that a religious community, the Missionaries of Our Lady of La Salette, Ina ng Pag-asa (Mother of Hope) Province, Philippines, took over the administration of the church on Oct. 1, 1994.

“When our local channels broadcast this news we were disappointed that such terrible news would put our little city on the map,” said Basso. He didn’t think the news reflected on Co’s heritage: “It’s just a bad act by someone who was not bright enough to foresee that such malfeasance doesn’t go unpunished.”

A military base, the March Air Reserve Base, is located between Riverside and Moreno Valley, which could explain Filipinos’ significant presence in and around Moreno, continued Basso. He’s seen the community’s growth from when he first arrived in the area some 35 years ago to the present day.

“Filipino-Americans have collaborated very well with the rest of the different groups in the community in all areas of developments—business, politics, church, social, sports,” he added.