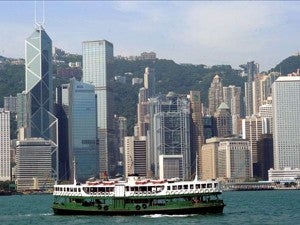 TRAVEL BAN. While millions of Filipinos continue to regard Hong Kong as one of their favourite year-round tourist destinations, the Hong Kong government still view the Philippines as a “severe threat” and that all travel to the country should be avoided. AFP PHOTO/MIKE CLARKE

Hong Kong has turned down the Philippine government’s repeated appeals to lift the Special Administrative Region’s nearly one-year-old ban on travel to Manila, the Department of Foreign Affairs (DFA) said.

The foreign office had “made representations with Hong Kong several times to have the travel ban lifted,” said Raul Hernandez, DFA spokesperson.

“The Department of Tourism (DOT) is also working to do this,” he told the Inquirer.

Hernandez said both the DFA and DOT had not given up though. “We will continue with our representations and hope that a positive outcome will result from them.”

On Aug. 23 last year, Hong Kong’s Security Bureau raised to black its Outbound Travel Alert (OTA) for the Philippines after eight Hong Kong tourists were killed and seven wounded in a bus hijacking perpetrated by a dismissed Filipino police officer.

For over 10 hours, Rolando Mendoza held a bus full of Chinese tourists hostage in a desperate bid to get back the job he had lost over corruption charges. He was killed in a police assault on the tourist bus.

In its OTA, the Hong Kong government declared a “severe threat” in the Philippines, which meant that all travel to the country should be avoided.

The OTA system “aims to help people better understand the risk or threat to personal safety in traveling to 80 countries that are the more popular travel destinations (of Hong Kong residents).”

On its web site, the Security Bureau noted that “when there are signs of threat in a place that may affect the personal safety of Hong Kong residents, the Security Bureau will assess and consider the need to issue an OTA, taking into account such factors as the nature, level and duration of the threat.”

Aside from the Philippines, Hong Kong has issued a black travel alert for Syria, where a more recent prodemocracy uprising has left close to 2,000 people dead.