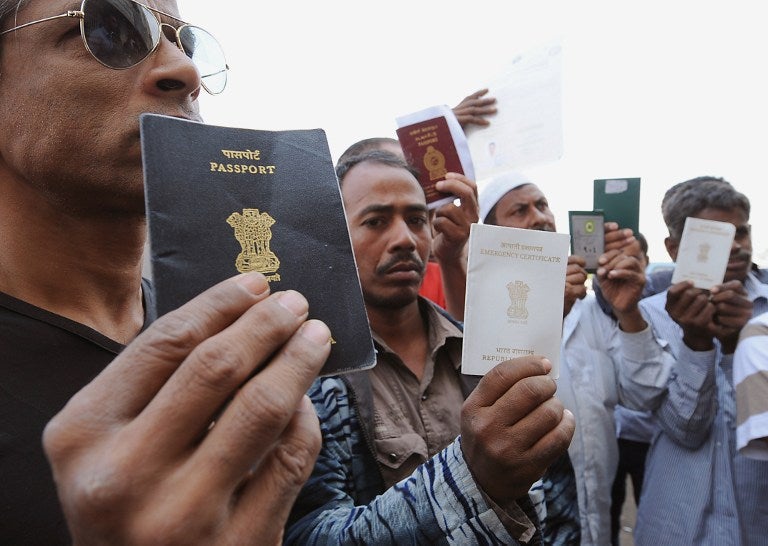 Foreign workers show their passports as they gather outside a Saudi immigration office waiting for an exit permit as Saudi security begin their search campaign against illegal laborers, on November 4, 2013 in downtown of Riyadh. A new four-month deadline ends for illegal foreign workers to regularise their status, leave the country, or risk imprisonment. AFP

RIYADH — Saudi authorities began Monday a clampdown on illegal immigrants after the end of an amnesty that gave overstayers and workers a grace period to leave or legalize their status.

Police patrols will be searching for illegally-staying foreigners and those who help them, interior ministry spokesman General Mansur al-Turki said late Sunday.

Violators will be arrested, penalized and deported, he said.

Nearly a million Bangladeshis, Filipinos, Indians, Nepalis, Pakistanis and Yemenis, among others, have taken advantage of the three-month amnesty — announced on April 3 and then extended for four months — and left the country.

Another roughly four million have legalized their situation by finding employers to sponsor them, a must to reside in most Gulf monarchies.

Foreigners desperate to work in the country were willing to pay for sponsorship, and sponsoring expatriates has become a lucrative business for some Saudis.

But under the new rules, workers can be employed only by their own sponsors, banning the practice of working independently or for non-sponsors.

Thirty Filipino workers who returned home on Monday alleged they were abused in the process of leaving.

“They treated us like animals,” said domestic helper Amor Roxas, 46, alleging that police placed them in crowded cells before they were taken to the airport.

Saudi Arabia, the world’s largest oil exporter, is seen as a goldmine for millions of people from Asia and elsewhere in the Arab world, who find work as common laborers, drivers, porters and housemaids.

Expatriates account for around nine million of the country’s 27-million-population.

Saudi Arabia has the Arab world’s largest economy, but the unemployment rate among natives is above 12.5 percent, a figure the government is aiming to reduce.