‘Our feet were chained’ 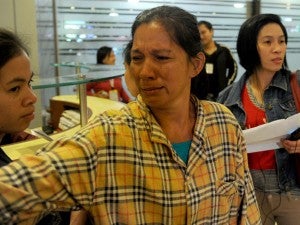 Filipina domestic helper Amor Roxas (C), 46, weeps upon arriving at the Philippines’ main international airport on Nov 4, 2013 as she recounts her ordeal after being expelled from Saudi Arabia, where an amnesty for illegal workers expired at the weekend. She is among 30 Filipinos who were deported from Riyadh a day after the amnesty ended, while thousands more without proper working permits remained trapped there, officials say. AFP

Thirty Filipino workers deported from Saudi Arabia arrived home on Monday and alleged they were abused amid a crackdown on illegal migrants in the Middle Eastern kingdom.

The deportees were among an estimated 6,700 Filipino workers stranded in parts of Saudi Arabia where an amnesty for undocumented foreigners ended on Sunday.

“They treated us like animals,” said domestic helper Amor Roxas, 46, who burst into tears while narrating her ordeal.

She claimed Saudi police rounded them up and placed them in a crowded cell for four days before they were paraded from the immigration center to the airport.

“Our feet were chained,” added Yvonne Montefeo, 32, in between sobs.

Saudi Arabian Embassy officials in Manila did not want to comment on the allegation of abuse.

The Philippines had asked Saudi Arabia for an extension of an amnesty for illegal migrants, but Vice President Jejomar Binay said Monday that King Abdullah did not respond to the Philippine request.

With the deadline lapsing on Sunday, Binay said the Philippine request for an extension was considered moot.

And that means undocumented Filipino workers will be arrested in the crackdown on illegal migrants in the oil-rich kingdom.

But Binay, also the presidential adviser for migrant workers’ affairs, said Filipino workers in the kingdom had nothing to worry about, as those who were already being processed for repatriation would not be arrested.

“Those who will be arrested are [the illegal migrants], those still working and have not yet applied [for repatriation],” Binay said in an interview on Radyo Inquirer 990AM.

But Migrante International, a support group for overseas Filipino workers, said 1,700 other workers remained stranded in Jeddah waiting for their documents to be processed so they can return home while about 5,000 more were scattered in Riyadh, Al Khobar and Dammam and also needing consular assistance.

Migrante warned that the Filipinos “are in danger of being violently dispersed, arrested and detained by Saudi authorities” as the kingdom cracks down on illegal migrants.

The Filipinos are among tens of thousands of mostly Asian unskilled workers likely to be expelled, the group said.

The crackdown started early this year, but the Saudi government offered an amnesty to allow the workers to legalize their stay.

Binay said more than 4,000 Filipinos had been repatriated since the crackdown was announced, while 1,716 are waiting for their exit documents to be processed even as the deadline expired on Sunday.

Labor Secretary Rosalinda Baldoz gave a slightly lower figure on Monday. She said 1,488 Filipinos had yet to be issued exit visas by the Riyadh government.

The Department of Foreign Affairs (DFA) said 4,420 Filipino illegals had been repatriated from Saudi Arabia while 1,500 were still waiting for immigration clearance to fly home.

Information from the Commission on Overseas Filipinos showed that as of December last year, 108,000 of the 1.27 million Filipino workers in Saudi Arabia were undocumented.

Baldoz gave the assurance that the Philippine Overseas Labor Office in Riyadh and Jeddah were “ready to shelter illegal” Filipinos in Saudi Arabia.

“As of Nov. 2, 727 Filipinos—428 women and 299 men—had called up the Philippine Embassy in Riyadh regarding access to shelter,” Baldoz said in a statement.

As of Monday, 206 Filipino illegals were sheltered in the Migrant Overseas Workers Resource Center in Riyadh, Baldoz said.

Baldoz also called for a P50-million supplementary budget “for the needs of those who will be affected by the Saudi crackdown against Filipino illegals.”

DFA spokesman Raul Hernandez said the Philippine Embassy in Riyadh, the Philippine Consulate General in Jeddah and the branches of the Philippine Overseas Labor Office across Saudi Arabia would provide assistance to undocumented Filipinos who might be arrested.

Saudi Arabian Ambassador to the Philippines Abdullah Al-Hassan earlier told the Inquirer that the Saudi government would strictly enforce its immigration laws once the extension of the deadline for illegals to correct their status lapses.

“[After] the expiry of the grace period deadline, the penalty or punishments prescribed in the law shall be applied strictly on any violator among foreigners and their employers,” Al-Hassan said.

Undocumented workers in Saudi Arabia had been given up to July 3 to correct their status, but on the request of the Philippines, India, Pakistan, Indonesia and Bangladesh, King Abdullah extended the deadline to Nov. 3.

Al-Hassan said the four-month extension was “deemed enough time for those who are serious in correcting their status or in returning to their countries.”

He said the Saudi government doubled working hours at immigration centers to process the papers of a heavy volume of applicants.

With the lapse of the deadline on Sunday, “Saudization”—a policy giving priority to Saudi Arabians in hiring—goes into full swing in the kingdom.

About a tenth of the Philippines’ population live and work abroad, and their dollar remittances are a vital pillar of the economy.

A vast majority of them work as unskilled laborers or maids, and are exposed to situations where they are prone to abuse.—Reports from Tarra Quismundo and Jerry E. Esplanada; Kristine Angeli Sabillo, Inquirer.net; and AFP