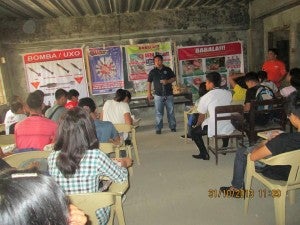 EU, in a statement on Monday, said it has been funding a program that would help residents in conflict areas.

“Eighteen local volunteers, including local non-government organization staff and students from the Western Mindanao State University, were trained by [Swiss Foundation for Mine Action] on what UXO look like; where they might be found; the risks they pose; safe behavior to adopt; unsafe behavior to avoid; and who to call for assistance,” the EU said.

The trainees, which also include members of aid agencies and volunteers, are expected to impart what they learned to the Zamboanga City evacuees.

The EU pointed out that the armed conflict between Philippine forces and the MNLF last September has left parts of Zamboanga City littered with unexploded ordnances.

“While a clear-up operation by the Philippine Bomb Disposal teams has removed most of the UXO, hazardous items will continue to be uncovered as residents and repair teams return to the area, and rubble and debris is removed,” it said.

“Close liaison between the trainers and the Zamboanga City Police Department ensures that, if returnees encounter UXO, they know who to call and that they can expect something to be done about the hazard,” the statement said.

The Swiss Foundation for Mine Action also carries out surveys in villages affected by unexploded ordnance (UXO) and at times facilitates UXO clearance. The group, benefiting from the P32 million-grant from the EU, has been implementing such operations and training in 26 municipalities in Maguindanao, Cotabato, Lanao del Norte and Lanao del Sur.