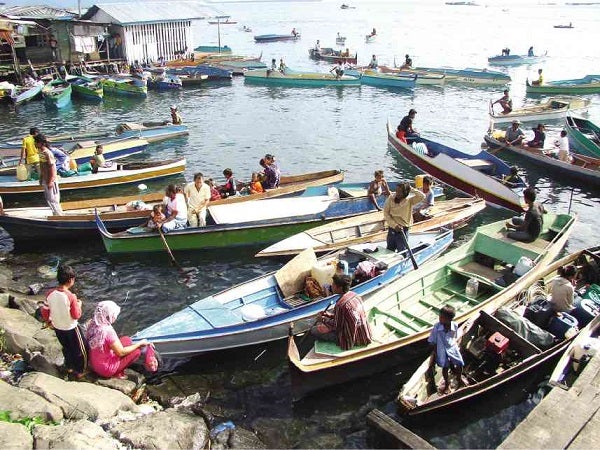 At least 40 million people depend on the sea in areas bounded by three countries—the Philippines, Malaysia and Indonesia—that have entered into an agreement to protect and jointly manage the rich marine resources that these areas hold. ORLANDO MALIWANAG

DAVAO CITY—On the map, the Sulu and Celebes Seas look like semi-enclosed twin basins separated only by a chain of islands called the Sulu archipelago.

Experts from the Sulu-Celebes Sea Sustainable Fisheries Management Project (SCS-SFMP), however, noted that the marine life in these two water basins is not separate: The Pacific Ocean flows into Sulu Sea in Northern Mindanao and between the Sangihe-Talaud archipelago in North Sulawesi.

“Surface waters from one basin overflow to the other every two weeks,” SCS-SFMP said.

Bounded by the Philippines’ southwest coast, Malaysia’s Sabah island on north Borneo and Indonesia’s Sulawesi island, the Sulu and Celebes seas form the Sulu Sulawesi Marine Ecoregion (SSME), a large marine ecosystem now considered one of the world’s 200 most critical, which over 40 million people depend on for food and livelihood.

On Tuesday, Oct. 29, a three-country commitment to protect and manage this common marine area was signed with the hope of ensuring food security for over 40 million people, said Romeo Trono, regional project manager of the SCS-SFMP of the United Nations Office for Special Services.

The landmark agreement, which environment and fisheries officials from the three countries signed, called for the implementation of a strategic action plan to deal with the impact of declining resources in the Sulu-Celebes Sea.

Trono said the strategic action program focused on the management and conservation of small pelagic fishes such as sardines, long-jawed mackerel, big-eye and round scads, and frigate mackerel, a major source of food for most people in the area.

“They are the most abundant, and their stocks are shared by the three countries,” Trono said.

“By focusing our conservation plan on small pelagic fisheries, we ensure that the welfare of economically marginalized communities is being taken care of,” Trono said.

“Small pelagic fishes like sardines, scads and mackerel do not only provide sources of income to fishers but are also the more affordable protein source for lower-income populations in the region,” Trono said.

He said the commitment to protect the Sulu-Celebes Sea, signed in Balikpapan, East Kalimantan, would hopefully make fisheries production in the region more sustainable.

Located at the top of the Coral Triangle, the region serves as a habitat for a number of species of corals, fishes, mollusks, mangroves, sea grass and algae that are among the highest in the world.

“This high diversity of marine life results in healthy ecosystems that provide food and the capacity to cope with natural and manmade calamities and their impacts,” he said.

But recent studies showed that over-exploitation of fish and increased extraction of fishery resources have resulted in declining fish size and catch in the region.

“The total marine fisheries production in the Sulu-Celebes Sea countries in the last decade represents a tenfold increase from the 1950s,” he said.

“Marine capture production within the Sulu-Celebes Sea increased steadily in the last 60 years, threatening to deplete existing resources,” he explained.