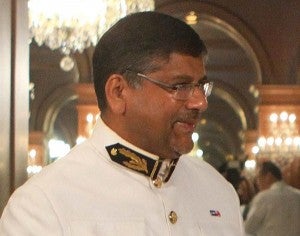 MANILA, Philippines—Despite all the gloom hovering over the government due to recent controversies, there remains a “Bright Spot” in the Philippines in the eyes of the world.

A government transparency project from the Philippines was declared this year’s winner at the just concluded Open Government Partnership (OGP) Summit in London on Nov. 1, for engaging citizens to hold their leaders accountable to them.

The Citizen Participatory Audit (CPA) project led by the Commission on Audit (COA) bested six other entries in the annual award given out by the OGP, a two-year-old initiative that seeks “to secure concrete commitments from governments to promote transparency, fight corruption, and harness new technologies to strengthen governance.”

On its Twitter account, OGP posted a photo of Vivienne Suerte-Cortez of COA’s partner organization, Affiliated Network for Social Accountability in East Asia and the Pacific Foundation, who manages the winning project.

In a statement, British Ambassador to the Philippines Asif Ahmad congratulated the Philippines for the win. The UK is currently lead cochair of the OGP, in which some 60 countries are participating.

“The Open Government Partnership Summit in London is meant to celebrate the successes of programs making a real impact on the ground. The CPA initiative from the Philippines is an inspiration to others who want to make a real change and turn ambitious ideas into positive action to improve governance,” Ahmad said Saturday night.

COA Commissioner Heidi Mendoza was also in London to receive the award during the Nov. 1 closing ceremonies of the OGP’s two-day summit that brought together top officials and transparency advocates from around the world.

In announcing the Philippines’ entry in the finals earlier, the United Kingdom’s embassy in Manila said the Bright Spots competition recognizes “the most inspiring examples of how open and accountable government is changing people’s lives.”

The Philippines’ winning CPA program, launched a year ago, taps public participation to better audit government programs and agencies “to make government more effective, transparent and accountable.” Citizens may take part in the public audit through the website http://www.i-kwenta.com/audit-101/the-citizen-participatory-audit/.

It currently has four pilot audits covering the areas of public works, welfare, environment and education.

The program encourages citizens to take part in “whistle-blowing and truth-telling” by identifying and reporting government programs or agencies for investigation or assessment.