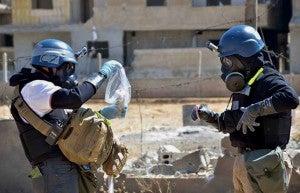 Investigators take samples from sand near a part of a missile that was suspected of carrying chemical agents, according to activists, in the countryside of Ain Terma, Syria. The Organization for the Prohibition of Chemical Weapons, a watchdog group, was awarded the Nobel Peace Prize on Friday, Oct. 11, 2013. AP FILE PHOTO

BACOLOD CITY, Philippines—Three teams from the Organization for the Prohibition of Chemical Weapons (OPCW) were in Syria to investigate alleged chemical weapon attacks in the war-torn country.

Winning the Nobel Peace Prize was the last thing on their minds, said Franz Ontal, 49, a Filipino from Negros Occidental who heads inspector training for the OPCW.

At about 8 a.m. of Oct. 11, Ontal said they heard a rumor their group had bagged the prestigious award.

Three hours later, Ontal said, the OPCW received official word it had won the Nobel Peace Prize for its extensive efforts at eliminating the chemical weapons that have haunted the world from Hitler’s gas chambers to the Syrian battlefields.

“I’d say my first reactions were of inner jubilation, followed by a quiet satisfaction that OPCW’s more than 16 years of difficult and largely unsung work in the shadows of international arms control were finally being recognized,” Ontal said in an online interview on Friday.

He stressed that the recognition by the Nobel Committee was an incredible honor and the publicity that it had generated would definitely highlight OPCW’s international mandate.

He also hoped the award would boost their campaign to finally eradicate chemical weapons.

Ontal said the award ceremony would be held in Oslo, Norway, on Dec. 10. OPCW director general, Ambassador Ahmet Uzümcü, will accept the peace prize on behalf of the organization.

Ontal is part of the group that is helping prepare the Nobel laureate exhibit opening in Oslo the day after.

Ontal said the prize would boost the moral of the inspectors in Syria where a lot of work needed to be done.

“I hope the peace prize will underline the fact that OPCW is in Syria as a neutral entity that does not confer any importance on one faction over another. We have been sent by the international community to perform a task and to carry it out in a transparent, efficient and safe manner,” he said.

Perhaps “the Nobel will put more pressure on the few nonsignatory countries left to join the Chemical Weapons Convention, so we may finally eradicate CWs from the planet,” he added.

Ontal is the fourth of six children of the late Dr. Pat Ontal, the company physician at Victorias Milling Corp., and Lydia Teves Gamboa.

He graduated from La Salle High School Bacolod in 1980, obtained his undergraduate degree in Biology in 1985 and began premed studies at La Salle College Bacolod, before emigrating to the United States in the late 1980s.

Ontal said he worked as a paramedic for the fire department of New York’s Emergency Medical Services Division, serving mostly in Brooklyn between the late 1980s and 2006.

He joined OPCW in 2006 as an inspector, health and safety specialist.

In 2009, he joined the Inspectorate Training Cell as an instructor and eventually became the head of inspectorate training in 2012.

He now supervises all matters related to the training of inspectors although he is still an inspector and gets deployed on missions.

The training of new inspectors lasts about four months and takes place in the Netherlands and other member-states. This includes toxic chemical training, employing live chemical warfare agents, as well as mock inspections at active CW and industry sites, he said.

After their initial training, OPCW inspectors  undergo a minimum of 25 training days per year to maintain their skills, Ontal added.

He said they had a number of staff members in other branches who were either from the Philippines or had Philippine ancestry.

Asked if working in the field did not scare him, Ontal replied: “Fear is not necessarily a bad thing if you know how to use it. Fear keeps people sharp and thwarts overconfidence.”

He said theirs was a hazardous profession since explosives and chemical agents were a bad combination in any workplace. But he added that the OPCW maintained stringent health and safety policies and risk management protocols that were both rigid and dynamic at the same time.

Because of these safety controls, road traffic accidents had higher risks compared to the actual chemical weapon destruction, he said.

But he admitted that in Syria, it was different since they were carrying out their mandate in the midst of an armed conflict, which is untrodden ground for them as an organization.

Since the OPCW was formed in 1997, Ontal said they had not had any major casualties among their inspectors.

“This is a record that we are trying to keep,” he said.

The OPCW is active in all countries that have declared chemical weapons stockpiles, such as Russia, Libya and the United States, he said.

Because the OPCW also verifies the destruction of old and abandoned chemical weapons from the First and Second World Wars, they also conduct inspections in Western Europe and China, he added.

“We have inspectors that maintain a 24/7 presence in countries that are actively destroying their chemical weapon inventories, verifying that every single warhead and bomb containing chemical agents has been destroyed and the agent neutralized,” Ontal said.