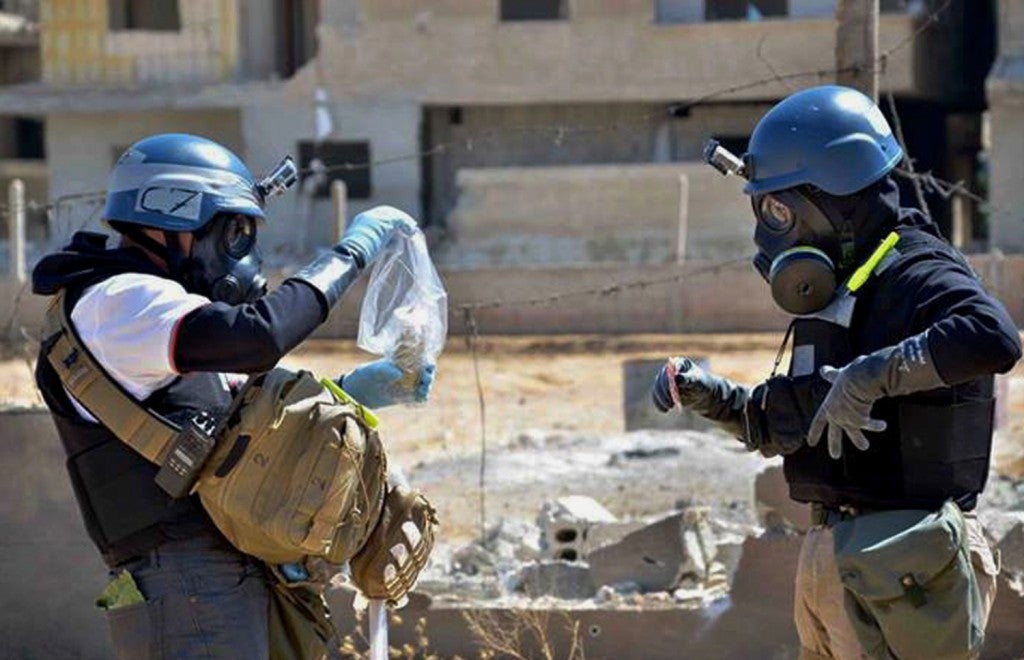 Investigators take samples from sand near a part of a missile that was suspected of carrying chemical agents, according to activists, in the countryside of Ain Terma, Syria. The Organization for the Prohibition of Chemical Weapons, a watchdog group, was awarded the Nobel Peace Prize on Friday, Oct. 11, 2013. AP

BACOLOD CITY, Negros Occidental – One of the officers of the Organization for the Prohibition of Chemical Weapons that won the Nobel Peace Prize is a Filipino.

“Our family is deeply proud of Franz, his teammates in the field, the OPCW and their courageous work over these many years, implementing the Chemical Weapons Convention and eradicating stockpiles of the world’s most terrible weaponized toxins,” said Ontal’s Manhattan-based brother, Rene, in a FaceBook chat with the Philippine Daily Inquirer on Saturday.

Brother Ray Suplido of the University of Saint La Salle in Bacolod City said Ontal serves as a good example to students and to others as one who uses his knowledge and skills in the service of humanity.

“Ontal’s being part of the organization is a great honor and pride for La Salle Bacolod, which inculcates in its students the need to work for causes that benefit the people,” he said.

Ontal is the fourth of six children of the late Dr. Pat Ontal, a company physician at Victorias Milling Company,  and the former Lydia Teves Gamboa.

According to Rene Ontal, his brother graduated from La Salle High School Bacolod in 1980, completed his degree in Biology in 1985 and began pre-med studies at La Salle College Bacolod before immigrating to the New York metropolitan area. There he eventually served as a paramedic and emergency medical technician instructor with the New York City Emergency Medical Services, then under the New York City Health and Hospitals Corporation, which later merged with the New York City Fire Department.

In 2005 Rene said his brother left New York City for The Hague, Netherlands, to begin his service with the OPCW, first as a medic for the chemical weapons inspector and disposal teams and later as head of inspector training, a position he still holds.

The OPCW won the Nobel Peace Prize for its extensive efforts to eliminate chemical weapons that have haunted the world from Hitler’s gas chambers to the Syrian battlefields.

Formed in 1997, the OPCW, which is based in The Hague, worked to enforce the Chemical Weapons Convention, the first international treaty to outlaw an entire class of weapons. It had kept a low profile until last year when the United Nations asked its help to investigate alleged chemical weapons attacks in Syria.

In explaining their work in Syria to CNN, Franz Ontal said they tried to get as much information as they could about what they were doing.

A look at the impact of recent Nobel Peace Prizes