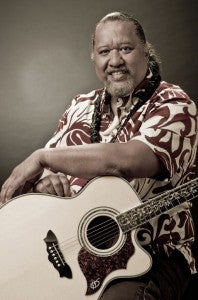 HONOLULU—Local boy and internationally renowned singer Willie K will headline a star-studded cast of entertainers at “Sharing Memorable Moments with Emme & Friends” on Saturday, Nov. 9, at the Filipino Community Center’s (FilCom) Grand Ballroom in Waipahu. The gala fund-raising event is to benefit FiCom.

Also performing with Willie will be guests Jasmine Trias, Jimmy Borges and a few other surprise celebrities and stars, many of whom have appeared on “Emme’s Island Moments” television specials. They will be honoring veteran TV personality Emme Tomimbang for her impact on Hawai’i and its Filipino community.

“It will be a most unique evening of entertainment and am only sorry I couldn’t invite all the wonderful people who have been on “Emme’s Island Moments.” It would take a weekend marathon!” says Emme. “I wanted Willie to be the key performer because my husband, Jim Burns, and I consider him as family. I’m the godmother of his daughter Lycettiana.”

Raised on Maui, Willie Kahaiali’i (a.k.a. Willie K) has been entertaining audiences since the age of 10. One of Hawai’i’s most versatile talents, Willie performs a myriad of musical genres, including Hawaiian, jazz, blues, reggae, rock, country Western, and even opera. He has either played with or opened for musical giants, including B.B. King, Santana, Al DiMeola, Willie Nelson, Prince, Bonnie Rait, Jackson Browne, Mick Fleetwood, George Benson, Jimmy Buffett, Crosby, Stills and Nash and more.

Willie released his first CD, “Kahaiali’i,” in 1992 and has since earned multiple “Na Hoku Hanohano” awards, most recently for “Warehouse Blues,” which won Rock Album of the Year in 2011. “Right now I love the title of being called Hawai’i’s blues man,” he says.

Willie K also supports causes through his celebrity golf tournament; an event he says was the brainchild of Tomimbang. “I have raised over half a million dollars for patients in Maui who suffer from cancer and they thank me all the time, but truly Emme is the one they should thank also,” he says.

“I also want to thank Emme for being a great inspiration. She helped me as well as many others in our careers, so appearing at the FilCom event is just a small token of my appreciation. Supporting non-profits is important to me because I believe that if you are blessed with good fortune share the wealth with those who are less fortunate and or are in need of help; it all encompasses the word aloha.”

In 1993, the singer and Emme met during an interview on KHON TV News. When Emme left the station to form her own production company, Willie sang on her farewell morning newscast. “It was a chicken skin moment,” Tomimbang remembers. “Since then, he’s performed at my Christmas concert specials and our friendship has flourished.

“I’m happy to bring friends to the FilCom, to introduce them to one of my favorite charities. I am so proud of what the FilCom has done for the entire community. I feel that the FilCom stands as a monument to all the hard working Filipinos who came to Hawai’i as sugar plantation sakadas (workers) and stayed to contribute so much to our island state.”

For more information on event sponsorship and ticket sales for Sharing Memorable Moments with Emme & Friends, call (808) 680-0451 or visit www.filcom.org. Follow the Filipino Community Center on Twitter @FilComCenter or like us on Facebook at www.facebook.com/filcomcenter.