US ‘pivot’ to Asia gaining strength—admiral 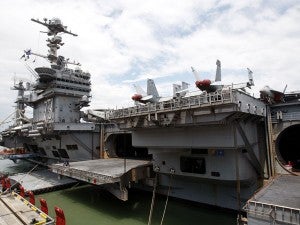 ABOARD THE USS GEORGE WASHINGTON—The United States has significantly increased its warships and aircraft deployed in Asia despite Washington’s budget woes, adding punch to its “pivot” to the region, a senior naval commander said.

Rear Admiral Mark C. Montgomery, commander of an aircraft carrier strike group homeported in Yokosuka, Japan, said the expanded military presence would have a calming effect on simmering tensions and territorial disputes in the region.

“The strategic rebalancing has resulted in an extremely higher number of surface combatants, cruisers and destroyers that support the strike group,” Montgomery told Agence France-Presse in an interview on Wednesday aboard the aircraft carrier USS George Washington in the West Philippine Sea (South China Sea).

“What we’ve seen is an increase in surface combatant presence here in the Western Pacific… so these ships are spread throughout those areas,” he said, in the interview at the flag bridge of the nuclear-powered supercarrier as fighter jets took off and landed on the deck as part of drills.

“Having more ships gives us more presence. It allows us to have a greater force.”

Montgomery said US defense budget cuts and the recent 16-day partial US government shutdown have not affected his command.

The shutdown forced President Barack Obama to skip two Asian summits this month, triggering concerns about the extent of US commitment to the region as China becomes more assertive.

“Operations and maintenance decisions have not affected us. The strategic rebalance is continuing in earnest,” the admiral said.

“We have sufficient funds for our operations… there is in fact a strategic rebalancing in place that has resulted in more ships and aircraft being out here.”

Last year, then US Defense Secretary Leon Panetta said in Singapore that the Pentagon would shift 60 percent of US naval assets to the Pacific region by 2020 as part of an Asian “pivot” announced by Washington.

Montgomery, a 25-year veteran in the US Navy, said ships and planes from San Diego, California and Pearl Harbor in Hawaii are being deployed to Asia for up to eight months as part of the rebalancing.

“That gives me a lot more flexibility, a lot more presence,” he said.

US presence has ‘calming effect’

Montgomery commands Carrier Strike Group Five from the nuclear-powered George Washington, which was in international waters in the West Philippine Sea on Wednesday when journalists and other visitors were flown in from Singapore.

A carrier strike group packs a powerful punch as it comprises an aircraft carrier, backed by at least one guided missile cruiser, a destroyer, a supply ship and a fast attack submarine.

It is a key element in the US strategy of projecting its military power across the world.

The George Washington heads the US Navy’s largest carrier strike group and the only one homeported outside the US. It operates in three theatres, including the waters off the Korean Peninsula where tensions between North and South Korea are simmering.

It also operates in the sea off Japan where Tokyo and Beijing are locked in a territorial dispute, and in the West Philippine Sea, where China and four Southeast Asian states as well as Taiwan have overlapping claims over territories.

Montgomery’s carrier strike group held military exercises with South Korea and Japan off the Korean peninsula this month, sparking a sharp rebuke from Pyongyang which denounced the drills as a “serious military provocation” and an “attack on our efforts for peace”.

This week the group was cruising the West Philippine Sea while holding smaller military exercises with the Malaysian navy and air force and later in the month with its Singaporean allies.

“I’m an element of any contingency response. I think a carrier strike group is always a critical element of it,” Montgomery said, when asked about the role of his command in any military conflict in the region.

China claims almost all of the waters in the West Philippine Sea, including those approaching the shores of smaller countries like the Philippines, a former US colony with which Washington has a mutual defense treaty.

Manila, which is the most vocal in criticizing China’s alleged aggressive moves in the sea, and Washington are in talks over a deal that will expand US military presence in the Philippines, which evicted fixed US military bases in the early 1990s.

Montgomery said the increased US military presence in the region is a stabilizing factor.

“Presence always has an assuring and calming effect,” he said.

“I think the fact that we’re here (now) says a lot whether or not we will be here if there was a crisis.”