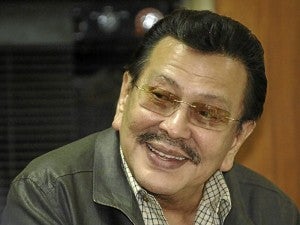 MANILA, Philippines – The Department of Foreign Affairs (DFA) is not making any move to prevent former president and now Manila Mayor Joseph Estrada from personally submitting a formal apology to Hong Kong for the 2010 Luneta hostage tragedy.

“I think former President Estrada is acting on his own,” DFA secretary Albert del Rosario told reporters Thursday when asked for comment on Estrada’s intentions.

DFA spokesman assistance secretary Raul Hernandez, in a separate interview said that “for now, there is no such move [to ask him to not push through].”

Estrada is planning a trip to Hong Kong within the week to submit a city council resolution formally apologizing for the bungled operation, an aide said Wednesday.

Luch Gempis, secretary of the Manila city council, reportedly said that “the principal purpose of the resolution is to end the controversy, to have closure.”

“There is an admission of a bungled operation. The city of Manila is being more candid now,” he said.

Estrada will submit the apology despite the position of President Benigno Aquino III that no apology should be given for the incident because it was “the act of one individual” and that it must not be seen as “the act of the entire nation.”

Disgruntled former police officer Rolando Mendoza held hostage 25 tourists inside a bus last August of 2010 demanding that he get his job back from which he was dismissed. The hostages were composed of 21 Hong Kong nationals and four Filipinos.

The incident ended in a shootout between Mendoza and the police leaving him and eight of the hostages dead. Several more hostages were injured.

The Hong Kong government issued a “black” travel alert against the Philippines after the incident and has been demanding an apology from the government for its failed rescue operation.

“We have already exchanged perspectives on it. The President has talked to the chief executive of Hong Kong regarding that, and we would like to move forward by having high level consultations,” he said.