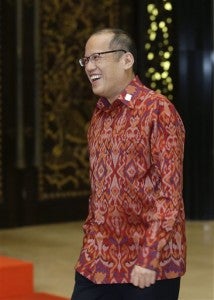 BALI, Indonesia—Hong Kong Chief Executive Leung Chunying finally got to meet President Benigno Aquino, more than three years after eight of his compatriots were killed during a bungled hostage rescue operation in Manila.

Leung, however, failed to get the apology his people had been demanding when he sat down with Aquino for some 30 minutes on the sidelines of the Asia-Pacific Economic Cooperation (APEC) Summit here Monday.

“But we do extend our sincerest condolences. Again, we expressed our deepest regret that it’s so contrary to how we treat visitors in our country,” Aquino said in an interview with Philippine media late Monday night.

On whether Leung accepted what fell short of a categorical apology, Aquino recalled: “I think he mentioned something like, ‘We recognize that in your culture, personal fault is what you apologize for.’ I guess, that’s the closest comment that he actually delivered in relation to your question.”

The meeting came a day after APEC host Indonesia kicked out nine Hong Kong journalists of APEC premises for shouting questions at Aquino about the hostage siege in Luneta on August 23, 2010, less than two months after he assumed the presidency.

As Aquino entered a meeting of APEC business leaders on Sunday, the reporters demanded to know whether he would meet Leung and apologize to the families of the hostage crisis victims.

That the group was shouting at him “didn’t seem right,” the President said.

“Wherever we go, we are expected to conform to certain norms of behavior,” he said in light of criticism that revoking the journalists’ APEC accreditation was tantamount to curtailing press freedom.

Aquino said the meeting with Leung produced “clarification as to what each side has been doing, why the perception of each side is such.”

“So we are working to put that behind us,” Aquino said. “I got the sense [that] they really were sincere in trying to come to a solution to that incident.”

It turned out that both leaders were coming from two different “cultural” perspectives on apology.

From the Philippine perspective, Aquino told Leung that “in our culture, when we apologize, then it admits that we are at fault as a country, as a government and as a people.”

“And we pointed out, that from our perspective, there is one lone gunman responsible for this tragedy,” he added, referring to dismissed Senior Inspector Rolando Mendoza, who hijacked a tourist bus and demanded reinstatement.

Mendoza, a Filipino tour guide, and eight Hong Kong tourist were killed in a gripping hostage drama in front of the Quirino grandstand.

Aquino said Leung cited the case of a ferry accident for which the police chief “apologized to the community even though he was not directly responsible.”

“That’s your culture, you practice those, that’s your system,” the President replied. “But in our system, we cannot admit wrongdoing if it’s not ours.”

The persistent demand for an apology is founded on criticisms that Philippine law enforcers mishandled the entire hostage episode, leading to the death of the Hong Kong tourists.

Aquino said he had been told by Leung that survivors were still requesting a “dialogue” with Philippine authorities. He acknowledged the need to “update them on the processes involved” and said Justice Secretary Leila could brief the families on the status of cases.