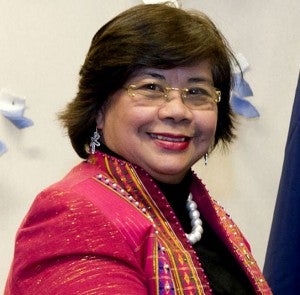 Philippine Ambassador to Belgium and the European Union Victoria Bataclan

Bataclan, who is also the Philippine ambassador to Luxembourg, told visiting Filipino journalists here that a team from the European Maritime Safety Agency  (EMSA) is in Manila for the final audit of maritime schools’ compliance with the Standards of Training, Certification and Watchkeeping for Seafarers (STCW).

The STCW, an international convention which entered into force in 1984, sets qualification standards for masters, officers and watch personnel on commercial vessels.

The EMSA, which assists EC in monitoring maritime safety compliance, has raised concerns on the quality of maritime education in the Philippines and warned that Filipino seafarers could be banned from boarding EU-flagged ships if remedial measures would not be made.

Bataclan said the European audit team, which has been in Manila since October 7, met with officials of the Maritime Industry Authority (Marina), the Commission on Higher Education and the Philippine Regulatory Commission. Marina is the lead agency for STCW implementation in the Philippines.

Seventeen maritime schools and training institutes were set to be visited by the team “to determine if their training standards are aligned with STCW requirements,” the Philippine Embassy said in an aide memoir.

“The audit follows a videoconference held between Marina and EMSA, where the two agencies discussed the remaining issues pertaining to the Philippines’ STCW compliance,” it said.

Marina has submitted its “factual corrections” to EMSA’s April 2013 draft report and provided the European maritime agency with its “corrective action plan,” the embassy said.

The final audit ends Thursday and EMSA’s draft report is expected by mid-November. The draft will be sent to Marina for factual corrections and  presented to EU member states by early next year.

The Philippines is one of the world’s biggest suppliers of seafarers. Of the 350,000 Filipino seamen working overseas, 80,000 are on board EU-flagged ships.

Bataclan clarified however that in case the Philippines fails to pass the final audit, a ban will be imposed only on Filipino seafaring officers, comprising about 20 percent of seafarers employed in EU vessels.

The audit has been done although the Philippines is on the white list of the International Maritime Organization, a United Nations agency responsible for improving maritime safety and preventing pollution from ships.