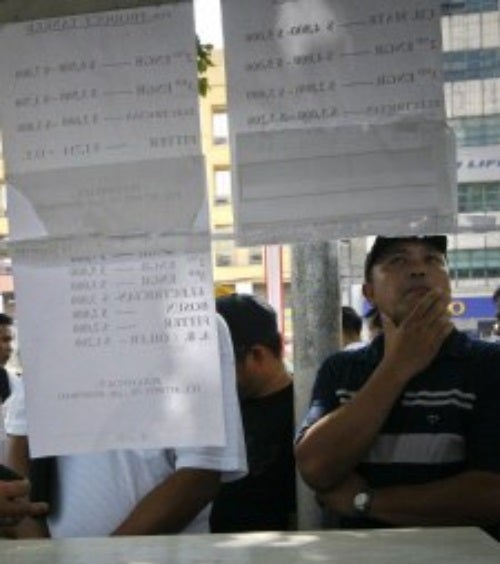 A prospective applicant view job opportunities at a recruiting booth at the seafarer’s park in Manila. The Philippines supplies a third of the world’s merchant mariners. AFP

“The clock is ticking,” said the official, who declined to be named because he was not authorized to speak to the media on the subject.

The official said the blacklisting of Filipino seafarers from EU-flagged ships should have been implemented since last year but its imposition was deferred following an appeal from the Philippine government.

The European Maritime Safety Agency (EMSA), which assists EC in monitoring maritime safety compliance, has raised concerns regarding the quality of maritime schools in the Philippines.

The official told visiting Filipino journalists here that Manila has been informed about the possibility of Filipino seafarers being banned from boarding EU vessels.

The Philippines is one of the world’s biggest suppliers of seafarers. There are about 100,000 Filipino seamen onboard  ships from the 28-member EU.

In March 2010, the EU also banned all Philippine airlines from flying into the European airspace, citing safety concerns.

Last July, EU lifted its ban on Philippine Airlines but Cebu Pacific has yet to get its flying clearance.