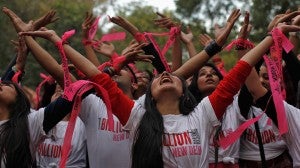 DAVAO CITY, Philippines – Women will scale up their worldwide Valentine-day protests this year, calling for an end to impunity as they demand justice for victims and survivors of violence against women, according to theater artist Monique Wilson.

“We’re sick and tired of what is happening,” Wilson, now the global coordinator of the One Billion Rising for Justice, said in a meeting with community leaders and members of Gabriela women’s group here last week.

She said that in 2013, about a billion women from 207 countries joined the global campaign against violence against women, and next year, organizers would further scale up the protests to call for justice and an end to impunity in the country.

“Our One Billion Action for Justice will address issues causing this continuing violence, and this is the issue of impunity,” she said. “We could not separate the issue of violence against women from the issues on mining, poverty and corruption.”

Wilson said violence against women has intensified and has not shown signs of abating.

“Eve Ensler felt that we need to do a more daring action, we need to make this a global movement, to tie with women’s movement around the world,” she said, referring to the author of the “Vagina Monologues,” Eve Ensler, who started the V-day campaign, where millions of women would take to the streets on Valentine’s day, calling for a stop to the violence against women.

Wilson said they will give the government and other institutions the last chance to address the violence against women, otherwise, they will come back again the following year to stage a worldwide strike and walkout.

“We’ll rise and gather outside venues where we have been denied justice,” Wilson said.

“In courts, US embassies, church, not only on the roads or the town plazas, we’re doing it because it is symbolic to gather there on this day,” Wilson said, referring to the February 14 V-day campaign, the “V” standing for “valentine,” “violence” and “vagina,” and as women leaders here would like to think “victory.”

Wilson said she has been inspired by the works of community women leaders and promised to come back in November to visit communities in Compostela Valley.