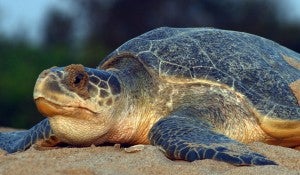 The fishermen were caught on Friday off the western Philippine island of Palawan, in waters near the South China Sea (West Philippine Sea) where authorities say foreign poaching of endangered or protected species has become a major problem.

“Upon initial inspection, it was found out that the said foreign fishing vessel is loaded with undetermined (number of) pieces of dead sea turtles,” said Benigno Caabay, a station officer at the Palawan police provincial headquarters, quoting an official report.

The 13 are being held at a police camp in Palawan while officers look into filing a case against them, Caabay added.

Sea turtles are protected under Philippine law and catching them is punishable by at least 12 years in jail.

In November last year, in the same area where the Vietnamese were caught, the Philippine navy rescued more than 100 sea turtles from poachers. But the fishermen, whom authorities believed to be Chinese, escaped.

Twelve Chinese fishermen were also arrested in April after their boat, which ran aground on a protected reef, was found to be carrying hundreds of dead pangolins, or scaly anteaters, another protected species.

Their case is still pending in court.

The issue of foreigners poaching endangered species has become sensitive in the Philippines, with environmentalists calling for stronger action against the perpetrators.

Following pressure from their governments, the foreigners often have the charges dropped or lessened, allowing them to be deported quickly back home.

Caabay said fisheries experts were still determining what species of turtles were caught, although he stressed they were all protected under local laws.

The turtles were frozen and packed tightly in the cargo hold of the fishing vessel, he said.

Turtles are used in traditional medicine or are served as delicacy in many Asian countries.