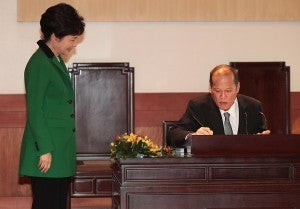 President Aquino signs the guest book as his South Korean counterpart Park Geun-hye looks on before their meeting at the presidential house in Seoul on Thursday, Oct. 17, 2013. The Philippines and South Korea on Thursday signed agreements on flood mitigation, defense and sports development as Aquino began a two-day state visit. AP PHOTO/AHN YOUNG-JOON

Park welcomed Aquino to the Blue House, South Korea’s equivalent of Malacañang, and thanked him for the Philippines’ support for South Korea in fending off an attack from its communist neighbor North Korea.

In response, President Aquino reiterated the Philippines’ decision to take a “rules-based approach” in resolving conflicting claims to territory in the West Philippine Sea (South China Sea) and thanked South Korea for its support.

“We do not want to pick a fight with anybody, but we will do what is needed to protect our sovereignty. As we respect other nations’ rights, we expect them to respect ours,” Aquino said.

“When we feel a greater sense of security, we are able to do more to improve the lives of our people,” he added.

Park expressed South Korea’s condolences and “deepest regret” for the loss of lives and the destruction of property in a powerful earthquake that hit Western Visayas on Tuesday.

She also wished for the immediate recovery of the areas badly affected by the quake and congratulated Mr. Aquino for his handling of an attack by Moro rebels on Zamboanga City last month.

“It [is comforting to know that] we are not alone in facing this problem,” the President said.

Philippine and South Korean officials signed three agreements for the release of an $80-million loan for a flood mitigation project in Pampanga province and improvement of defense cooperation and sports development between the two countries.

President Aquino and Park witnessed the signing of the three agreements at the Blue House.

Mr. Aquino said the defense agreement “creates opportunities for expanding and strengthening the longstanding partnership” between the Philippines and South Korea.

He thanked South Korea for the “imminent transfer” to the Philippines of one FA-50 combat jet and the purchase of other similar military aircraft, vessels, armored vehicles and command-and-control equipment.

“These will give a significant boost to the continuing modernization of the Armed Forces of the Philippines,” Mr. Aquino said.

The loan agreement between the Department of Finance and the Export-Import Bank of Korea’s Economic Development and Cooperation Fund will bankroll a flood mitigation project in Pampanga.

According to the finance department, the project will benefit low-lying communities in Pampanga by introducing measures to prevent the flooding of the Pampanga River and by constructing and rehabilitating schools in 80 flood-prone areas in the province.

Defense Secretary Voltaire Gazmin and South Korean Defense Minister Kim Kwan-jin signed a memorandum of understanding for the improvement of military cooperation between the Philippines and South Korea, including exchanges in training and education of military personnel.

Foreign Secretary Albert del Rosario, representing the Philippine Sports Commission, and Korean Minister of Culture, Sports and Tourism Yoo Jinryong signed a memorandum of understanding for the improvement of cooperation between the Philippines and South Korea.

Mr. Aquino is the first head of state to visit South Korea since Park was elected president in February.

Upon his arrival, Mr. Aquino proceeded to the Memorial Tower of the Seoul National Cemetery and laid a wreath to honor hundreds of Koreans who died in the 1950-1953 Korean War.

The Philippines sent a combat force to that war that ended in a United Nations-sponsored  armistice between South Korea and North Korea.

Filipino to be honored

On Friday, Mr. Aquino will present an award to Philippine-born Proportional Rep. Jasmine Bacurnay-Lee, the first naturalized immigrant to be elected to South Korea’s parliament.

Mr. Aquino will confer on Lee the Order of Lakandula with the rank of officer in recognition of her achievement and efforts to champion the cause of Filipinos and other foreigners living in South Korea.

Lee, 36, is a native of Davao. She was elected to South Korea’s National Assembly in 2012 as proportional representative, the equivalent of a party-list representative in the Philippines.