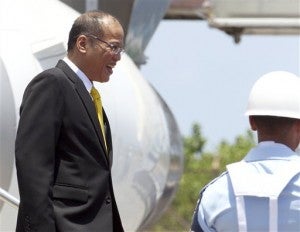 Mr. Aquino and his official delegation arrived at the Seoul Air Base at exactly 12:59 p.m. (11:59 a.m. Manila time) aboard a chartered Philippine Airlines flight.

The President was met by Philippine Ambassador to Korea Luis Cruz and other top Korean officials.

The President is the first head of state to make a state visit in Korea since President Park Gyeun-hye was elected into office last February.

Upon his arrival, Mr. Aquino immediately proceeded to the Memorial Tower of the Seoul National Cemetery and led a wreath-laying ceremony.

Mr. Aquino will then proceed to the Blue House, Korea’s seat of power, for a summit talk with President Park and to witness the signing of a memorandum of understanding on defense cooperation between the two nations.