China grabs limelight from wounded US at Apec summit 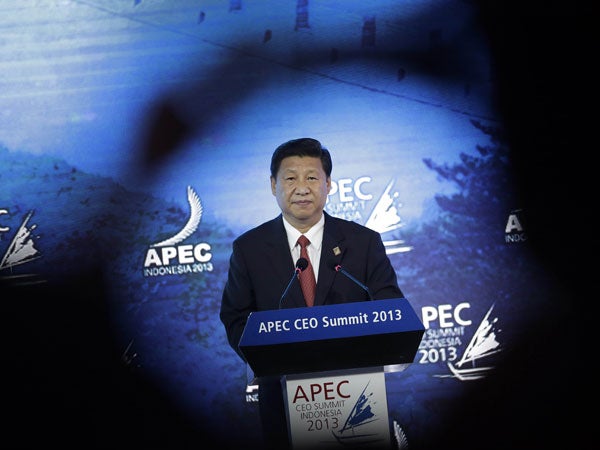 Chinese President Xi Jinping delivers his keynote address at the Asia-Pacific Economic Cooperation CEO Summit in Bali, Indonesia, Monday, Oct. 7, 2013. China took center-stage at an Asia-Pacific summit on Monday, adopting a leadership role on the strength of its new-found economic might as the United States struggles to overcome its budget paralysis. AP

NUSA DUA, Indonesia—China took center-stage at an Asia-Pacific summit on Monday, adopting a leadership role on the strength of its new-found economic might as the United States struggles to overcome its budget paralysis.

The US federal shutdown has stopped US President Barack Obama from attending the two-day Asia-Pacific Economic Cooperation (Apec) summit on the Indonesian island of Bali, and another meeting this week of East Asian leaders in Brunei.

US Secretary of State John Kerry stressed Obama’s determination to remain engaged with the Pacific Rim region. But his absence left the arena clear for the leader of one-party China to trumpet the mounting heft of the world’s second-largest economy.

“China will firmly uphold regional peace and stability and help cement a foundation for a win-win situation in the Asia-Pacific,” President Xi Jinping told an Apec business forum, as he emphasized his country was the biggest trading partner and export market for many nations in the region.

Prior to a gala dinner, at which Indonesia resurrected an APEC tradition of dressing up the leaders in artisan designs, Xi also sought in his speech to adopt a healing and united tone.

“China cannot develop in isolation of the Asia-Pacific and the Asia-Pacific cannot prosper without China,” he said, stressing that his country’s recent economic slowdown was the intended result of policies designed to put growth on a more sustainable path.

“We the Chinese often say a family in harmony prospers. As a member of the Asia-Pacific family, China is ready to live in amity with other family members and help each other.”

The communist leader has been touring Southeast Asia, where there is much disquiet about China’s territorial ambitions, and also touted the benefits of free trade pacts after securing commercial deals worth tens of billions of dollars in Indonesia and Malaysia.

China is involved in talks on a trade agreement grouping 16 East Asian nations just as Washington’s rival “Trans-Pacific Partnership” (TPP) of 12 countries appears to be running into trouble.

While sympathetic to Obama’s political plight, the leaders of US allies in APEC such as Singapore expressed disappointment that he had been unable to throw his presidential weight personally behind the TPP and Washington’s stop-start “pivot” toward Asia.

Foreign friends and rivals alike, as well as financial markets, are worried by a threat bigger even than the shutdown: the possibility that the US government might default on its colossal debts unless Congress raises the federal borrowing limit by October 17.

An unprecedented default by the holder of the world’s reserve currency would affect “the entire planet, and not just those countries with a strong geographical and economic linkage to the US”, Mexican President Enrique Pena Nieto said in Bali.

‘Race to the top’

But Kerry, taking Obama’s place at Apec, said the president’s epic tussle with the Republicans was merely “a moment in politics” that did not deflect the United States from its strategic goals.

“I want to emphasize that there is nothing that will shake the commitment of the rebalance to Asia that President Obama is leading,” Kerry told the business forum.

The United States is stumbling politically at a moment when, according to a statement by APEC foreign and trade ministers, the world economy can ill afford more instability following the 2008 financial crisis.

Previewing Tuesday’s final summit declaration in Bali, the ministers said that “global growth is too weak, risks remain tilted to the downside, and the economic outlook suggests growth is likely to be slower and less balanced than desired”.

Before he called off his foreign travel, Obama had intended to preside over a top-level round of talks among the TPP countries in Bali on Tuesday.

But doubts about the pact are gathering pace, and also about Obama’s vaunted “pivot.”

Attending APEC “would have been a golden opportunity for America and President Obama himself to show leadership in that context of the new emphasis towards Asia,” Malaysian Prime Minister Najib Razak said.

Obama was also forced to cancel visits to Malaysia and the Philippines due to the shutdown.

Najib sees the end-of-year deadline for the TPP as “very tight” given mounting discord over issues such as market access and protection of intellectual property.

But Kerry said a deal was still achievable in the timeframe, as he sought to sell the merits of the pact.

“At a time when all of us seek strong and sustainable growth, TPP is creating a race to the top, not to the bottom. It is reaching for the highest standards of all,” he said in his speech.—Jitendra Joshi