In prize-winning novel, a complex portrait of Nur Misuari

An ambitious, idealistic professor from Jolo, enraged by the abuses endured by Muslims in Sulu, leads an uprising on the island. The quixotic rebellion provokes a violent backlash that turns Jolo into an inferno.

“Below the Crying Mountain” Criselda Yabes’s powerful novel won the UP Centennial Literary Prize in 2008 and was long listed for the 2010 Man Asia Literary Prize.

It is a retelling of the burning of Jolo in 1974 when the Philippine military unleashed a brutal crackdown against the ill-fated Moro rebellion led by Nur Misuari.

Many Filipinos have probably forgotten or do not even know of this tragic chapter in our history. But in light of recent events in Mindanao, many have, no doubt, heard of Misuari.

The rebel leader who played a prominent role in that tragedy four decades ago is back. “Below the Crying Mountain” offers another way of understanding him in the wake of the disastrous uprising he led in Zamboanga.

In the novel, Misuari is Omar Hassan, known as the ‘Professor,’ a brilliant young, well-educated Tausug, with big ambitions. 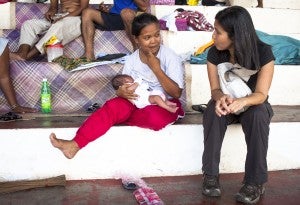 He could have had a promising career in mainstream politics or business. That was what led his aunt, Hadja Lu, to support his studies. But she ends up being disappointed.

Yabes writes: “He was a Tausug – the people of the sea current, no other tribe could claim the birthright of a true warrior, fighting the Spanish, then the Americans, century after century. Bloodshed is in their blood.

“Unfortunately for Hadja Lu, the young Omar Hassan, far away in the city, was training his head for rebellion instead of training his sight on business, money, fortune. …

“Teach!” She protested when he told her of his plans. “What future will that bring you?”

“The future of Sulu, Auntie,” he said.

“What future?” Hadja Lu trembled in frustration. “This place has no future.”

Omar Hassan disagrees. He builds a movement for ‘liberation,’ and plots a rebellion that he proclaims would give birth to a society in which Tausugs and all Moros would have dignity and freedom.

The nom de guerre he chooses underscores the epic future he envisions for his people and himself: Omar Sharif.

But Commander Omar Sharif is hardly the dashing Hollywood-style rebel hero the Professor imagines himself to be. He is a temperamental leader, driven as much by ego and ambition as a deep desire to help his people. He can be petty, given to churlish antics, such as when he publicly humiliates a loyal servant with a drinking problem.

He is also a lousy military tactician. The Professor’s uprising fizzles, quelled by the Marcos military in a merciless crackdown.

Hassan later looks back on the failed revolution with bitterness, angrily telling a foreigner, “‘Don’t forget. I’m an educated man. I had the vision of making Sulu great. …

“The distinguished Commander, now crippled,” Yabes writes. “How he could have made a name in history.”

While Misuari is an important character in “Crying Mountain,” the novel centers on two women, perhaps two of the most compelling female characters in Philippine fiction.  Rosy France is a mestiza from Zamboanga who falls in love with the Professor. Nahla is a feisty Tausug girl who sees her affair with a military officer as a way of escaping Jolo.

Nahla, her hair parted in the middle and in a mini-skirt, fantasizes about becoming a movie star. She is known on the island as the Ali MacGraw of Jolo.

She becomes friends with Rosy, known as the Milikan, or American, also famous on the island as the stranger who eloped with Jolo’s famous intellectual-activist. They talk about Nahla’s dreams in one scene:

“’Who’s going to come here looking for a movie star?’ said Nahla. ‘Nobody likes us, we belong to a race of pirates and kidnappers, that’s what the world thinks.’

“’Maybe you’re right, no one comes to Jolo,’ said Rosy France, ‘no one except me.’

‘And together they laughed, these two girls in miniskirts.’

Cris Yabes was exposed to the Mindanao conflict as a journalist having spent years covering the Philippine military. Her book “Peace Warriors: On the Trail with Filipino Soldiers,” a non-fiction account of the military campaign against the Moros won the National Book Award last year.

But Mindanao isn’t just a journalism beat for Cris Yabes. She spent part of her childhood in Jolo where her father established the first Metrobank in the early 1970s. Her family moved to Zamboanga shortly before the Moro uprising and the crackdown that followed.

Years later, during a reporting trip to Jolo, she met a friend who was the battalion commander on the island during the rebellion. He gave her a document that served as the spark for “Crying Mountain:” The de-classified after-battle report on the Jolo uprising.

“That brought out all of my childhood memories of Jolo,” she told me. “Reading it and being there at the same time. It made me think of doing a non-fiction book on the burning of Jolo.”

But then, “I realized that people I came across reminded me of my life and people who were close to me — that’s when I decided to fictionalize it,” she said.

That turned out to be a wise decision for as the novelist John Le Carre once said, writing fiction is about pursuing and portraying “the big truth,” instead of the “small truth” that journalists typically spend more time chasing.

Trust me, if you want a break from the sometimes conflicting and confusing news accounts of the Zamboanga crisis, “Below the Crying Mountain” is a compelling read that offers “the big truth” on the tragedy in southern Philippines.

Two international publishers have expressed interest in publishing the novel.

Unfortunately, efforts to make “Below the Crying Mountain” available to a broader audience have stalled due to disagreements over the contract with the novel’s Philippine publisher, UP Press and its partner the University of Hawaii Press. (UP Press Director Neil Garcia told me he is meeting with Cris Yabes and her agent on the matter.)

Meanwhile, Cris Yabes, who recently returned to Mindanao after a writing fellowship in the U.S., turned once again to journalism to explore the latest chapter in Sulu’s sad history.

She’s been filing reports from the frontlines. But it’s not just another news event to cover.

“Seeing my childhood city get torn apart was not the homecoming I was expecting,” she said in a Facebook post that recalled the Zamboanga of her childhood.

“It was our City of Flowers,” she continued. “It really was, and there was always bloodshed somewhere. Peace was possible, I’d told them so, it could happen; but there goes the Old Man, angry again, in a time warp, on another warpath.”