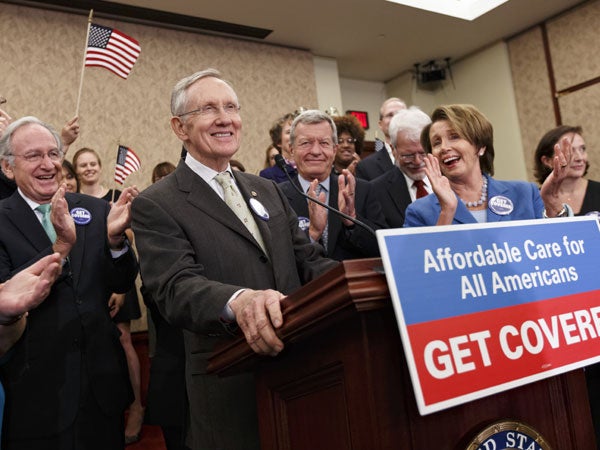 Senate Majority Leader Harry Reid of Nevada, center, accompanied by other lawmakers and people whose lives have been impacted by lack of health insurance, smiles during a news conference on Capitol Hill in Washington, Tuesday, Oct. 1, 2013, to celebrate the first day of the Affordable Care Act, popularly known as Obamacare. Undocumented parents, however, including Filipinos, have found themselves in an immigration and healthcare bind: how do they enroll their child in a healthcare exchange without disclosing their immigration status? AP

NEW YORK — R. Ng and his wife, both from the Philippines, have overstayed their visas since 2003. They have a nine-year-old son who is a US-born citizen.

As the nation prepares for the new healthcare system under the Affordable Care Act (ACA), the Ngs have found themselves in an immigration and healthcare bind: how do they enroll their child in a healthcare exchange without disclosing their immigration status?

“That would not be an easy thing to do,” said Ng, who is ethnic Chinese. “That’s scary, actually.”

It’s a dilemma faced by thousands of mixed-immigration-status families like the Ngs here and around the country. Afraid of coming into contact with a government agency, many immigrant families are wary that mandatory ACA enrollment for documented members of the household may put those who are here illegally in harm’s way.

“It’s a no-brainer, because we’re going to enroll our child but not ourselves,” Ng added. “It’s almost an admission to the government that our child has undocumented parents.”

The ACA does not extend to undocumented immigrants.

Under the law, individual states will offer healthcare exchanges that serve as an online marketplace for individuals—including those who have never had insurance, as is the case with many immigrants—to purchase an affordable health plan. Those individuals who are currently uninsured are required to apply for coverage through the exchanges or face a penalty.

Another study by the Pew Research Center Hispanic Trends project noted there are now about 11.7 million undocumented immigrants in the United States and, after the number bottomed out due to the Great Recession, that figure may be rising again.

Health-reform advocates are concerned that fear and mistrust of government among undocumented parents may deter families like the Ngs from enrolling their US-born children in a qualified health plan. Open enrollment in health exchanges starts Oct. 1.

“This is the biggest challenge that we see in the enrollment process,” Noilyn Abesamis-Mendoza, health policy director with the Coalition for Asian American Children and Families, said at a press briefing earlier this month with ethnic media in Manhattan. “There have definitely been some fears going around.”

Ng, who works in a retail store in Queens, says he feels fortunate that his family has remained relatively healthy, though the thought that one of them might fall ill frightens him. “I pray every day that won’t happen,” he says.

When one of them does get sick, Ng says the family typically self-medicates. But in 2009, during the H1N1 scare, Ng’s son developed a high fever, prompting a trip to the emergency room. “It [the fever] was very high,” Ng recalled,” and I didn’t want to wait until it was too late.”

Since 2009, New York Mayor Michael Bloomberg has enforced executive ordinances—EO 34 and 41—that ensure all New Yorkers, regardless of immigration status, have access to city services, including health clinics and city hospitals.

These ordinances also require city workers to protect the confidentiality of a person’s immigration status.

Still, Ng admits he is uncomfortable going to the emergency room because “our information gets recorded” and it may be detrimental when they eventually apply to legalize their immigration status.

But experts say such fears are misplaced.

Sara Rothstein is assistant director of policy and training for the New York Health Benefit Exchange, says, “When enrolling in the exchanges for their US-born children, parents who are undocumented only need information such as proof of citizenship and Social Security numbers for their children, not themselves.”

According to Rothstein, when undocumented parents apply for the exchange, every member of the family, regardless of immigration status, is assessed. For example, she says, a family with two undocumented parents and one US citizen child would be considered as a family of three and not one, which could make coverage for the child more affordable or qualify them for financial assistance.

And while undocumented parents are prohibited from purchasing health coverage through ACA exchanges and receiving tax credits, they are still qualified for services from safety-net providers such as community health clinics and public hospitals. Treatment in an emergency room also remains available for their care. All these programs, notably, have been in place even prior to the passage of the ACA.

“We will separately consider each person in a household and provide the most benefits for the whole family” based on the person’s eligibility and set criteria, including household income and number of members in the household, Rothstein says. “We will figure out how each member of the family gets covered.” New America Media