Temporary structures by US troops may be allowed, says PH panel 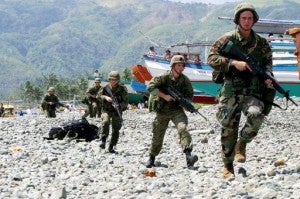 US Marines in the countryside. AFP file photo

MANILA, Philippines—Putting up structures by American forces may be allowed under the increased rotational presence in the Philippines as long as it is temporary, officials said on Wednesday.

“The possibility of construction is there, only if we approve it and only on a temporary basis. At the end of the exercise these will either be removed or transferred to us, under our, either existing process,” Foreign Affairs Assistant Secretary Carlos Sorreta told reporters at Camp Aguinaldo in a press briefing on Wednesday.

The officials held a press briefing for the first time after the third round of talks on the increased rotational presence of American troops held last week in Washington.

Sorreta said there are existing processes on transfer of equipment between the two countries.

“Anything they construct will have to be monitored and approved by the [Armed Forces of the Philippines]” he said, adding that these will “only be for a specific type and it will be removed at the end of the activity.”

In the third round of talks, Philippine officials and their US counterparts agreed that their “respective defense departments would be the designated implementing authorities of the framework agreement.”

The next round of talks will be held in Manila on October 1 to 2.

Sorreta said they were now “past the halfway mark” of the negotiations, although he could not determine when the agreement would be completed.

“The agreement will be signed when the Philippines is sure that it has gotten what it wants. It’s not peg on any date, it’s not peg to be signed on Christmas, as a Christmas gift or anything.  It’s when we are sure that we have met the parameters given to us and that’s the time we conclude it, it may, depends on how the agreement progresses,” Sorreta said when asked if the agreement would be crafted before US President Barack Obama visits the country next month.

The framework agreement is seen to bolster the country’s external defense and improve its disaster response.

Talks up on wider US military role in PH