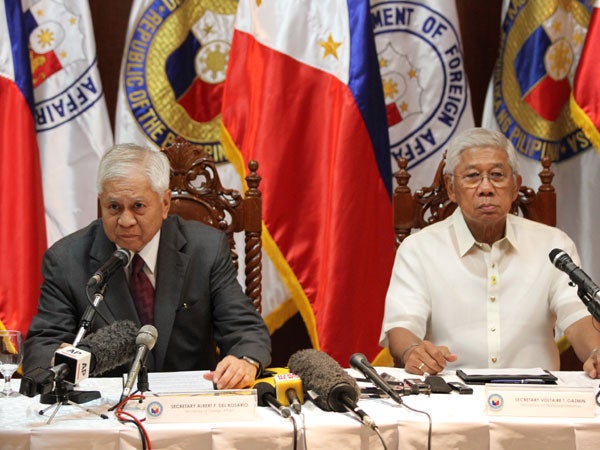 MANILA, Philippines–The Department of Foreign Affairs and the Department of National Defense on Monday announced that negotiations on a framework agreement on increased rotational presence of U.S. troops in the Philippines will start this week.

“This week, diplomacy and defense will once again intersect to secure our nation. This week we start negotiations with the United States to institutionalize this policy through a framework agreement,” Secretary of Foreign Affairs Albert del Rosario told media men at Camp Aguinaldo.

The first round of talks will begin Wednesday at DND in Camp Aguinaldo, and is expected to be finished within four meetings.

Defense Secretary Voltaire Gazmin said the plan is in line with the realignment of American troops in the Asia-Pacific, and comes as China, the Philippines and several other nations are locked in territorial disputes in the West Philippine Sea.

Gazmin stressed that the wider U.S. troop presence will comply with the constitution, which bans foreign military bases, and will not be permanent.

Del Rosario, for his part, said:  “For our defense, modernization can begin even before we are able to purchase the necessary defense systems. Deterrence can be enhanced even before modernization. Maritime security and maritime domain awareness will be given a boost even before we have ships and aircraft we need. And even before we have the advanced and sophisticated hardware we wish for, we will know how to operate and maintain them. Our ability to provide our people and the region with timely and responsive humanitarian and disaster relief will be greatly improved. ”

Del Rosario said that they have formally informed Congress of the negotiations.  A report by the Associated Press earlier said that Del Rosario and Gazmin had written leaders of Congress to make a case for an increased rotational presence of American troops, arguing that this would help the country attain a “minimum credible defense” of its territory.

Members of the Philippine panel in the negotiation are Carlos Sorreta of the Office of American Affairs of the DFA; Prof. Raymund Jose Quilop, Assistant Secretary of DND; Pio Lorenzo Batino, Undersecretary for Legal and Legislative Affairs and Strategic Concerns, DND; and Francisco Baraan III, Undersecretary from the Department of Justice.

Sorreta said that the US counterpart will be led by Eric G. John, Senior Advisor for Security Negotiations and Agreements in the  Department of State’s Bureau of Political-Military Affairs.

Both del Rosario and Gazmin left the briefing after reading their statements, and let the panel to discuss about the upcoming negotiations and answer questions by the media.

When pressed, Sorreta said they would brief the media as they go along with the negotiations.

“We are not re-negotiating the VFA on this process,” Sorreta said.

Meanwhile, Batino said the framework agreement “will only provide general parameters and principles under which the increased rotational presence will be implemented.”

“It will not provide details with respect to the size and shape of each activity mutually approved by the Philippines and the US.”

Batino cited that one of the possible benefits of the agreement for the Philippine government is for the temporarily deployed equipment by the US to be used for key mission areas such as maritime security, maritime domain awareness and humanitarian assistance and disaster relief.

“We must emphasize though that the DND and the Armed Forces is in the process of procuring modern defense equipment, however we believe that these US equipment to which we agreed to be temporarily deployed could supplement the AFP’s capability to perform its functions,” he added.

The Philippines and China are locked in a territorial row over some islands in the West Philippine Sea (South China Sea).

And with China’s expanding military might, it has become more aggressive in asserting its claims over large parts of the sea. The Philippines, meanwhile, has brought a case against China before the United Nations.
Signatories of the agreements will be representatives from the DND and the Department of Defense US.

“Our authority is just to negotiate, there will be a separate authority required from the Office of the President if we recommend that we enter into this agreement, the agreement will be bilateral in nature,” Sorreta said.