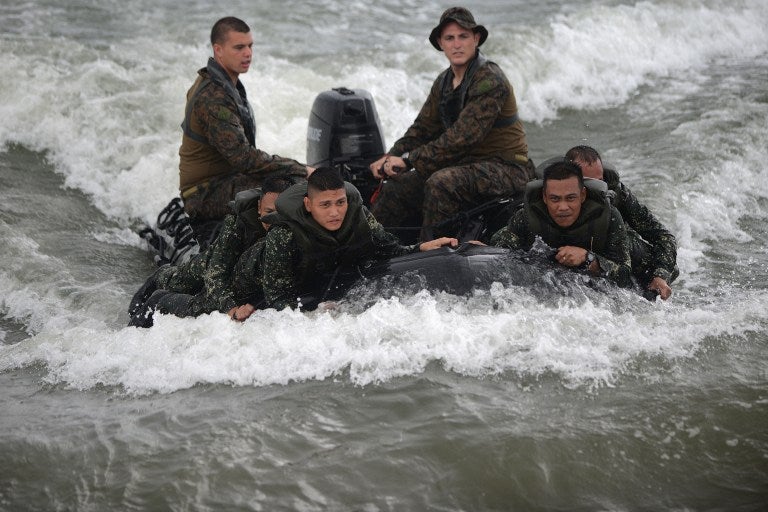 US and Philippine marines participate in small boat operations training at the seaNavy Education Training Center (NETC) in San Antonio, Zambales province, northwest of Manila on September 18, 2013. The Philippines and the US launched war games on September 18 at a naval base facing turbulent waters claimed by China, as the allies sought to highlight their expanding military alliance. AFP

ZAMBALES, Philippines — The Philippines and the United States launched war games Wednesday at a naval base facing turbulent waters claimed by China, as the allies sought to highlight their expanding military ties.

About 2,300 marines from both sides are taking part in the annual exercises which this year are being staged alongside the West Philippine Sea and ahead of US President Barack Obama’s planned first visit to the Philippines next month.

The Philippines, which has been seeking US military support to counter what it perceives as a growing Chinese threat to its South China Sea territory, welcomed the exercises as another important plank in building its defense capabilities.

“Multilateral exercises and agreements are essential in our cooperation and operational readiness as a multi-capable force, ready to defend our country’s sovereignty and integrity,” Philippine Navy vice-commander Rear Admiral Jaime Bernardino said in a speech at the opening of the exercises.

The three-week Philippine-US Amphibious Landing Exercises (Phiblex) will involve two US warships, as well as a series of live ground fire exercises and jungle survival training.

“We are building our capability on amphibious operations, so it’s part of the scenario,” he told reporters, although no specific hostile country was named.

Scarborough Shoal a flashpoint for tensions

The exercises were launched at a naval base in San Antonio, a town on the western coast of Luzon island that faces the West Philippine Sea.

The naval base is about 220 kilometers from Scarborough Shoal, a group of rocky outcrops that is one of the flashpoint areas in the territorial dispute between the Philippines and China.

The Philippines insists it has sovereign rights to the shoal, which fishermen from coastal towns near San Antonio have sailed to for decades, because it is well within its internationally recognized exclusive economic zone.

The nearest major Chinese land mass to Scarborough Shoal is Hainan island, about 650 kilometers away.

But China claims nearly all of the West Philippine Sea, even waters and land formations close to the other countries. Vietnam, Malaysia, Brunei and Taiwan, as well as the Philippines, have overlapping claims to parts of the sea.

The rivalries have for decades made the sea, home to vital global shipping lanes, a potential trigger for military conflict.

Tensions have risen sharply in recent years amid accusations by the Philippines and Vietnam of increasing Chinese aggressiveness.

The Philippines says Chinese vessels have occupied Scarborough Shoal since last year, preventing Filipino fishermen from going there. This month the Philippines accused China of erecting concrete structures there to begin a permanent presence.

However neither the US nor Philippine side would say exactly where the Phiblex exercises would be held, and Valdez said the drill to retake islands was not for Scarborough Shoal.

“There is no specific activity in the exercises designed (for) the Scarborough,” Valdez said.

The exercises are taking place as the allies move closer to a planned deal that would expand the US military presence in the Philippines.

The pact would allow the United States to bring military hardware on to local bases, and formalise more US troop visits. The Philippines has said it wants the pact signed as soon as possible.

Speaking at the opening ceremony, Brigadier-General Paul Kennedy, commander of the US 3rd Marine Expeditionary Brigade, said he did not know if the agreement would be ready in time for Obama’s visit to the Philippines on October 11 and 12.

“If it comes out of the president’s visit and if it’s politically mature enough to have been signed at that point it would be fortuitous, but I don’t have any idea where it stands at this point,” Kennedy told reporters.

The next round of negotiations are set for Manila starting on October 1.

The United States had a permanent military presence at two bases in the Philippines until 1992, when they were closed amid nationalist opposition.