Foreigners warned against marching vs pork 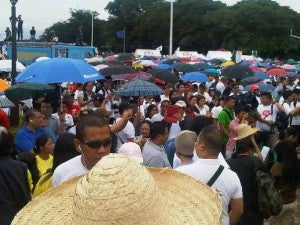 Think twice before joining demonstrations in the country, the Bureau of Immigration on Monday warned foreigners, a few days after it deported a Canadian student arrested last week for joining a protest rally during President Aquino’s State of the Nation Address in July.

The BI said it would arrest and deport foreign tourists caught joining protest rallies in the country, particularly demonstrations set against the pork barrel scam.

“As we have repeatedly stated, foreigners have no business joining these rallies as the act amounts to violating the conditions of their stay as tourists,” BI OIC Commissioner Siegfred Mison said.

The bureau has tapped the Philippine National Police to help monitor the foreigners in such mass actions.

The BI said it was expecting more antipork rallies in the coming days.

On Friday, immigration officials detained Canadian student Kim Chatillon-Meunier, who had been placed on the BI watch list for joining the protest rally during Mr. Aquino’s Sona in July.

She was allowed to leave on Sunday after the bureau issued a “voluntary deportation and release order” to her.

The student thanked the two groups for their support in a text message: “I could never thank you enough for your help and I will always remember it,” she said.

Canadian media earlier reported that Meunier’s boyfriend and fellow student Emile Kinley-Gauthier had also been in the Philippines but that he had left Manila on Aug. 1 without any hassle.

Gauthier admitted that he and Meunier took part in the July 22 Sona rally but they were just “observing.”

NUPL officials Edre Olalia and Julian Oliva said foreigners do not give up their basic rights, including the right to free speech, when they go to another country. The lawyers said Meunier was present in the rally only as an observer, and that she did not join the march nor did she speak in the rally.

“They should not have stopped Ms. Meunier from leaving in the first place and put her behind bars like a hardened criminal for almost two days. This is plain harassment and unnecessary aggravation. Such casual arrest and detention is (part of a) martial law mindset and tactics,” the NUPL said.

“Rather than deter foreigners from being genuinely concerned about the human rights and social conditions in the country whether as an academic exercise or as an advocacy, these incidents will trigger more questions on what the government is trying to hide,” Oliva said in a text message.