Father Engel: Keeping up the fraternal bonds of Filipino priests in the US | Global News
Close
menu
search

Father Engel: Keeping up the fraternal bonds of Filipino priests in the US 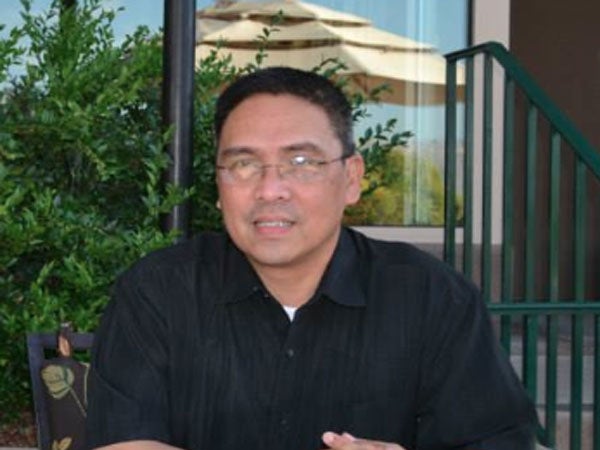 SAN JOSE, California—If you have a troubled marriage, Father Engelberto Gammad, president of the National Association of Filipino Priests in the USA (NAFP-USA), is a good person to know.

“Father Engel” is currently a full-time judge of the Ecclesiastical Tribunal of the Diocese of San Jose, which deals with annulment cases involving divorced Catholics who want to marry again in the Catholic Church.

Being head of the organization of Filipino priests in the US, from East and West Coasts, to Alaska and Hawaii is an important responsibility.  There are 839 Filipino priests working in the dioceses across the United States, Fr. Engel says, and their need for bonds of fraternity, mutual support and personal advancement in the priesthood must be addressed.

Father Engel was elected by regional representatives to a term of two years at a meeting on February last year.  He will serve in office until 2014.

“My primary responsibility as president of NAFP-USA is to ensure that the members are doing well in the churches where they minister,” he explained. “Members of our organization are priests of good standing in the USA. This means that they are attached to a diocese where they choose to serve the people of God.”

Some priests are in parishes, others are working as chaplains of hospitals or correctional institutions. There are also those who work as school administrators or educators.

Born in Cagayan Valley, northern Philippines, Fr. Engel grew up in the Philippines. He visited America several times before making his permanent move in 2001. He credits his Filipino culture with shaping the person he is today—tolerant, patient and hardworking, all of which have helped him in his ministry.

“I feel that one of my greatest assets as a priest, here in America, is the fact that I am a Filipino,” Fr. Engel states. “Our description as a tolerant, industrious and patient speaks well of the good work ethic of many Filipinos here in America and other parts of the world. It is uncommon for Filipinos to complain about their jobs. I think that Filipino culture has instilled these good qualities in us.”

He concludes that in order to serve the community, “those who want to serve must give the best of who they are. They must be willing to offer their talent and their time, to offer their selfless service to others.”

He said further:  “To serve with generosity, to put one’s body and soul into the ministry, to be able to sacrifice for the sake of Christ, to be able to live beyond our comfort zones—these are the formulas for a life-giving ministry of service to the people of God.”

Father Engel started his studies for the priesthood in the minor seminary in the 1970s.  He then spent four years in the UST major seminary in Manila, studying philosophy and receiving his bachelor’s degree, and later pursued another degree in Sacred Theology, finishing it in 1984.  He was ordained on May 24, 1984, and devotedly worked as a pastor in the Philippines for a decade before he was sent to Spain to pursue his doctoral studies in canon law. He got his Doctor in Canon Law degree from the University of Salamanca in Spain in 2001.

“The aspect of priesthood which I feel is most rewarding is when I say Mass,” Fr. Engle said. “This is a very special moment with God and his people. It is a time when we as individuals gather together to become one community, one body of Christ.”

In 2005, Father Engel moved up to Northern California and started in San Jose working at Holy Family Parish from September 2005 to July 2007.  Later on, he was appointed as associate pastor at St. Clare Parish in Santa Clara. Then in 2008 he was appointed as Adjutant Judicial Vicar by the bishop of the Diocese of San Jose.