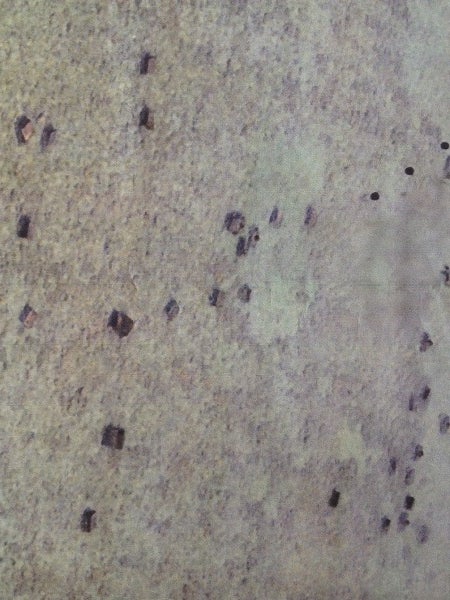 Seventy-five concrete blocks, believed to have been put up by China, were spotted in the Panatag (Scarborough) Shoal off Zambales based on a military reconnaissance report made last Monday. The blocks could be “a prelude to construction,” Defense spokesman Peter Paul Galvez said. Photo courtesy of Department of National Defense

MANILA, Philippines – At least 75 concrete blocks have been laid out apparently by the Chinese in the disputed Panatag Shoal (Scarborough) off Zambales, the latest aerial survey of the Philippine Navy showed.

“We have seen there 75 concrete blocks scattered in a two-hectare area in the northern portion…each block would be approximately two feet by two feet,” Defense spokesman Peter Paul Galvez told reporters Wednesday.

Three coast guard ships by the Chinese were also sighted in the shoal, Galvez added.

Last Tuesday, Defense Secretary Voltaire Gazmin told lawmakers at a budget hearing that 30 concrete blocks were sighted in the area by the military last Saturday.

Galvez said, however, it was possible that the new additional blocks were not spotted from the previous inspection.

“These may serve as foundations, platforms, a prelude to construction,” he said.

Asked how would the government respond, Galvez said they would pursue a diplomatic protest in the United Nations.

“At the moment we have the arbitration. [We] are proceeding with that [option],” he said.

A reef located 124 nautical miles off  Zambales, Panatag Shoal, once named as Bajo de Masinloc and known as Huangyan Island in China, was the scene of maritime standoff between China and Philippines that lasted for two months last year. Chinese presence continued in the area with its surveillance and fishing vessels criss-crossing the disputed waters.

Galvez said they are “really looking into this” to avoid a repeat of the Mischief Reef, an area near Ayungin also within the Philippine exclusive economic zone, where Chinese put up a military garrison.

“We are (also) doing periodic reconnaissance flights,” he said.

Structures built by China in the Mischief Reef were sighted in 1995.

The Chinese reportedly built structures purportedly to provide shelter for fishermen, but these were later transformed into a military garrison.

The Philippines had sought for arbitration under the United Nations Conventions on the Law of the Sea to pursue its claims in the West Philippine Sea. It filed a diplomatic protest as Chinese ships continued to come and go into the resource-rich areas of Panatag  and Ayungin Shoal (Second Thomas Shoal), which were both within the country’s 200-nautical mile EEZ.

China claims nearly the entire sea and had been showcasing its aggressive behavior there, but the Philippines and other neighboring countries claim parts within their EEZ.