Palawan to Sabah ferry service kicks off by yearend

MANILA, Philippines  – By the end of 2013, a roll-on, roll-off (RORO) ferry service will traverse between Palawan province and Sabah, according to the Philippine Information Agency (PIA).

Malaysia Business Council representative Datuk Haji Roselan Jobar Mohamed said Wednesday in a statement to the media that “the start of a weekly direct flight between Kota Kinabalu, Malaysia and Puerto Princesa City will be on October 28 this year.” 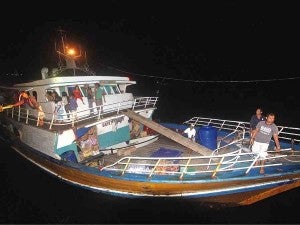 To improve the exchange of goods and services between the two provinces, the Palawan and Malaysia Business Councils, both under the auspices of the Brunei Darrusalam-Indonesia-Malaysia-Philippines East Asean Growth Area (BIMP-EAGA), signed a memorandum of understanding (MOU) creating the new RORO terminal.

“The proposed RORO route would include the port in Brooke’s Point-Rio Tuba, Balabac-Kudat, Malaysia and another vessel to service the route of Mindoro Occidental-Coron-Linapacan-El Nido,” the press statement said.

The PIA release also said that the domestic Montenegro Shipping Lines Inc. is “keen on serving the proposed routes.”

The aviation and air link services, moreover, will be provided by MASwings, a regional airline subsidized by Malaysia airlines.

Palawan Governor Jose Chaves Alvarez said that the newly-established route is a “positive development that would result in increase in commerce and trade and creation of jobs for the people in Palawan.”

In February, a standoff between Malaysia and the Philippines took place. More than 200 armed followers of Sultan of Sulu Jamalul Kiram III stormed to North Borneo to claim Sabah leaving 68 Filipinos and 10 Malaysian security personnel dead.