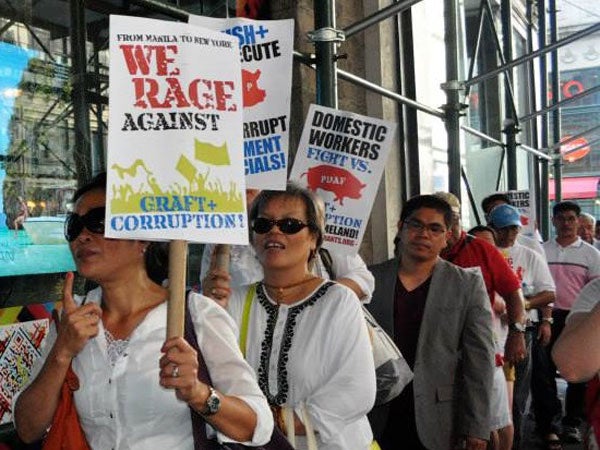 NEW YORK CITY—Let’s see now. When was the last time we Filipinos got so angry we marched on the streets to scream, curse and throw insults out of rage?

I remember being at EDSA 1 in 1986 where millions came out in defiance of the Marcos Dictatorship. That was totally spontaneous. I don’t remember calling a friend saying, “Hey let’s meet at Greenhills and then we can have coffee afterwards.” I remember watching TV and seeing people pouring out into the streets. Inflamed by that scene, the

husband and I got on a jeepney in our “tsinelas” and joined the swelling crowd.

I had left the country by the time EDSA 2 happened in 2001, but I doubt I would have joined even if I were back home. The corruption of Joseph Estrada may have been a big issue then but for some reason, it did not get me all riled up maybe because Filipinos knew they were up against an individual with no scruples but voted him anyway. 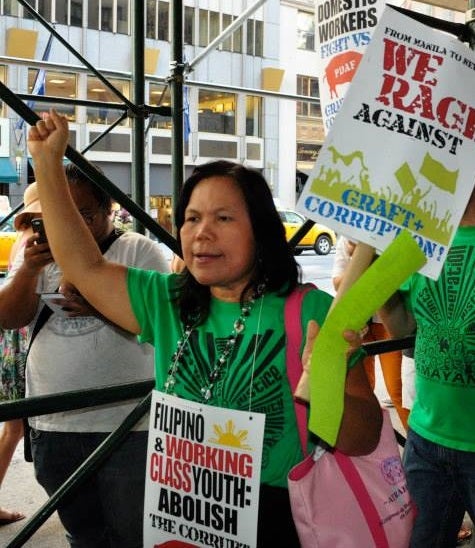 A protester from Damayan grassroots organization. PHOTO by Elton Lugay

At last Sunday’s rally outside the Philippine Consulate building, I was feeling pretty riled up about the P10 billion pork barrel that went to several lawmakers’ bogus foundations, all of them orchestrated by one military wife, the shameless Janet Napoles. So were many of the protesters.

Are we talking 13-, 15-year outbursts? Is that how long it takes for Filipinos’ patience to snap to the point where they make the decision to join a protest rally and cry “tama na, sobra na” with similarly enraged others? Marcos was a despot for 14 years before he finally got the boot from People Power.

“Nakakainis,” echoed at least three people I spoke to at the Consulate rally of August 25: businesswoman Gloria Cabrera, New Jersey resident Shirley Asunto and retired school teacher Lumen Castaneda. They said all those years we immigrants toiled long, backbreaking hours in America, our remittances went to false NGOs of these politicians.

Think of all the fundraising many young FilAms have done to help Filipinos in times of disasters and calamities, said community activist Steven Raga. “Band-aids won’t work anymore; taking to the streets is the only effective treatment.”

Domestic worker Linda Oalican of Damayan said the problem is “historical.” Graft and corruption has long plagued Philippine politics. It’s the reason, said Michelle Saulon of National Alliance for Filipino Concerns, “4,500 Filipinos are forcibly migrating every day” for better opportunities around the world.

Despite all the strides in the economy, railed lawyer Merit Salud of the Movement for a Free Philippines, the country “remains a nation of poor people which sends her children to work abroad so that they may have a chance to live human lives.”

Ana Liza Caballes of Ugnayan ng mga Anak ng Bayan said Filipino Americans do care about the corruption that happens back home. When politicians pocket pork barrel funds, “they are not only stealing money they are also stealing our dreams and aspirations and the opportunity to have our family members stay in our homeland.” If the country were better run, there would be no need, said Gary Labao of the New York Committee for Human Rights in the Philippines, “to leave the Philippines” to work abroad as maids and nannies.

The struggle is far from over, said hotel manager Don Servillas. “People Power did not end with the ouster of Marcos.”

Remember 2016 when the next national election comes around, cried businesswoman Loida Nicolas Lewis of the U.S. Pinoys for Good Governance. “Let’s vote the rascals out.”

That’s three years from now. Let’s all remain angry and be ready with our votes. With reports from Elton Lugay