Filipino food conquering NY, one balut at a time 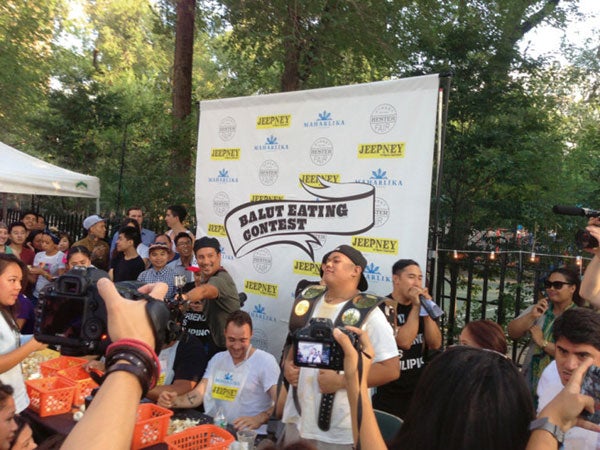 NEW YORK CITY—Filipino food is conquering New York, one balut a time. Or lumpia, or halo-halo.

There seems to be some stars aligning somewhere as Filipino dishes and snacks are being talked about and discussed on the streets of New York. Not as much as conversations about cronuts, but we’ll get there. Hopefully.

Over the weekend, the team behind Maharlika and Jeepney restaurants staged the 2nd annual Balut-Eating Contest. For the uninitiated, balut is a fertilized duck egg 14 to 21 days old, on average—hardboiled and consumed warm on the shell and ideally with a pinch of rock salt to taste.

Last year’s winner, 28-year-old Wayne Algenio, devoured 37 eggs to win the title again, beating 11 other valiant competitors. “I had never tried it before, so I had no clue what it was going to taste like or the texture would be,” Algenio said. “It tastes similar to a regular boiled egg, but with sauce.”

Born and raised in Queens, New York, Algenio never heard of balut when he was growing up and only saw it on television featured in shows like “Fear Factor” and the food show hosted by Andrew Zimmern.

Asked about how it felt to be able to defend his title, he remarked with a smile, “It felt great defending my title. I was pretty nervous the few days before the contest since it was the first time I would be defending a title. But I’m still hungry. Lechon time!”

As a competitive eater, Wayne joined his first contest in August 2012. “It was a local pizza contest and I was just looking to make some extra cash. The balut contest is definitely shorter than most contest I compete in which are usually 10 minutes long,” he shared.

Compared with other eating contests, eating balut is a bit more difficult and more technical since contestants have to crack the shell open and get the egg out.

“In other contests like pizza or burgers, I’m just constantly eating. So I have to have a lot more capacity for those contests. For balut I need speed,” Algenio added.

When he’s not eating competitively, he goes for his Filipino favorites like lechon, lumpia, BBQ sticks and his ultimate favorite, bistek. For the team behind the summer eating contest of the year (at least in the Filipino-American community), it is about opening the doors to showcase more of the Filipino cuisine out there.

“Hopefully it gets bigger every year. We want to have Filipinos, expats together and they have a place here in New York where they can go with friends and family,” said Nicole Ponseca, co-owner of Jeepney and Maharlika.

“I’m incredibly proud of our team. We’ve been really working hard to put the word out, so that the city can embrace Filipino food. I pinch myself every time I open a magazine or a newspaper and there is a feature about Jeepney or Maharlika. It’s great. How many times do we get to see Filipinos and non-Filipinos celebrating Filipino culture and food? It’s a multi-cultural crowd celebrating with us.”

Team member Tomas de los Reyes couldn’t agree more. “We have a two-time champion now, it is unbelievable! This could only get bigger and better and I can just imagine bringing more balut next year,” he said. “The crowd was awesome, they came to support. This is for Filipino food.”

Chef Miguel Trinidad was ecstatic and praised Algenio for the feat. “Oh my God, Wayne! You are a balut-eating god—37 baluts in five minutes. I could do 2 to 3, tops,” he said.

The team prepared and initially brought about 360 baluts. “As the contest came closer, they started disappearing,” Nicole said. “People started munching and eating balut as snacks. We started at 360, but today I think we have a little over 300.”

At Jeepney and Maharlika, they give tutorials to diners who want to try balut with their meals. During a recent kapihan at Jeepney with philanthropist and businesswoman Loida Nicolas Lewis, the discussions were broken with shouts of “Baluuuuut!” similar to what you’d hear on the streets of Manila or every town in the Philippines selling the delicacy. It turns out that the team chants “Baluuut!” everytime the kitchen gets an order.

A lot of New Yorkers are curious eaters and they are adventurous enough to try and eat food they would consider exotic or foreign to them. That is why the balut-eating contest gained traction.

This year, among these curious eaters was Carlos Borges, originally from Puerto Rico and now a resident of NYC. “I didn’t think this through,” he said laughing, referring to the balut-eating contest, which he joined upon the prodding of his Filipina girlfriend, Anafe Casas. Last Saturday, the couple ate balut for the first time. He finished 23, she ate 11.

“I hate losing. Balut is a very unique dish, I’m not sure if I’ll eat it again,” Borges said. “I almost lost it a couple of times because I got a few raw ones. I wanted to win but he (Algenio) is the champ.”

Another contestant, Dale Watkins, is no balut virgin. In fact, he was described prior to the competition as “someone who eats balut like candies.” He was able to finish 11 as well. “I’ll be back next year to redeem myself,” he said laughing.

“I’m not making excuses but opening them up was a little more difficult than I thought. I’ll have to strategize a little bit and eat more balut on the side. I have no problem eating them, I’ll just practice how to open them faster.”

Yahoo Travel featured Nicole in a recent interview and cited her for the idea. “We may or may not have been drinking when we came up with the idea for this competition,” Nicole told them. “But, really, it’s less about the intimidation factor and more about finding a fun way for us to gather everyone together around something our culture loves.”

This year, it was one of the gatherings for the season. Its new location at the Hester Street Fair downtown may have been smaller than last year’s Dekalb, but the loyal followers of Filipino cuisine were not deterred.

With craned necks and all, they witnessed a long row of participants break open hundreds of balut, collectively filling the air with that unique smell and immediately transporting them back home, no matter where it is.

“I have to say thank you to Andrew Zimmern, Anthony Bourdain, April Bloomfield, Mario Batali and all these chefs who have come before us to try all these kinds of meats and offals and different kinds of cuisines. Without this kind of people pushing multi-cultural food, I don’t think we’d be as successful without them,” Nicole added.

Just this week, Anthony Bourdain, host of “Parts Unknown” on CNN ate balut during an interview with Piers Morgan. “This is a fetal duck egg very popular in the Philippines and Vietnam. There is a very hot, hispster restaurant currently in New York where hipsters with ironic facial hair and sunglasses are lined up twelve feet in to eat this. It’s not one of my favorite things, but it’s not that bad,” Bourdain said.