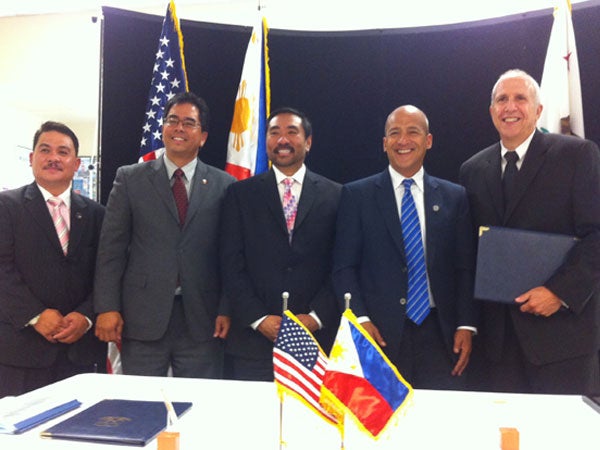 DALY CITY—Filipino Americans have higher rates of depression than the general US population, yet 75 percent of them have never used any type of mental health service. Fil-Ams also have a lower rate of seeking mental health treatment than other Asian Americans.

These are some of the findings of the San Mateo County behavioral services, which prompted the Philippine Consulate in San Francisco to sign landmark Memorandum of Understanding (MoU) with the Behavioral Health and Recovery Services of San Mateo County, where ten percent of the population are Filipino.

During the MOU signing in Daly City on Wednesday, Stephen Kaplan, director of the San Mateo County BHRS, described the agreement as the first ever done in America as far as he could recall.

“Nobody has done what we’re going to do in a few minutes, which is sign an MOU,” Kaplan said. “For the last several years, we have focused on issues of mental health so that shame and stigma will be reduced in the community.”

Kaplan said the MOU signing would legitimize all their efforts by way of support from not only the council to help communicate with the people but also the Philippine Consulate office for its referral services.

“We can have a significant impact,” Kaplan said, “People no longer have to be silent and they could go for some help. If you experience any mental issues and substance abuse, you’ve got help. “

Kaplan said, “One percent of the population in any group may have a serious mental illness, and it could either be schizophrenia, bipolar disorder and major depression. “

Kaplan said serious mental illness is really an issue of the brain not a moral failing: “It has a biological origin.” At the same time, he assured that most people get into recovery and medications.

“One of the three pillars of Philippine foreign policy is the protection of the rights and promotion of the welfare and interest of Filipino overseas,” said Jaime Ramon T. Ascalon, deputy consul-general, “and we endeavor to promote the health and welfare of Filipinos overseas.”

As a government agency with jurisdiction over ten Northwestern states in the US, “we look after more than 900,000 Filipinos,” said Ascalon. For each Consulate employee, there are 27,396 Filipinos who need to be served, he said, adding, “One can just imagine the chances that a Filipino comes to us for help.”

He said that the consulate aims to increase community awareness of mental health issues and refer Fil-Ams seeking or inquiring solutions to their mental health woes to the proper resources.

Barely four years into the implementation of the Mental Health First-Aid Training in the US, the consulate staff in San Francisco was trained as Mental First-Aiders in 2011 in collaboration with BHRS.

“Our staff gained insights on how to deal effectively with clients who are in emotional distress, nervous exhaustion, mental breakdown or burnout,” Ascalon explained.

Evelyn F. Balanco, unit chief of the North County Mental Health and Recovery Services, the largest in San Mateo County, said the agency has a Filipino-focused team currently attending to around 200 families combined with Latino families.

“We have a Filipino-focused program with Filipino component social workers to assist in speaking particularly the second-generation Filipinos,” Balanco said.

The unit has organized services in attachment areas, especially Daly City, which is home to some 32,720 Filipinos.

Help includes the call taker (for walk-ins or incoming callers), individual therapy, clinical case management and vocational program, aside from referrals of the Philippine Consulate in San Francisco.

“Our team members speak different languages and dialects and regardless of your belief about mental health causes, we’re ready to listen,” Balanco said. The unit also assists people on MediCaid and MediCal insurances.

In a recent presentation, Dr. Jei Africa, of the SMCBHS, bared the following statistics, pointing to the need for a blueprint for providing comfort, recovery and reducing distress related to stressful situations, trauma and crisis:

• Filipino Americans have higher depression rates than the general US population (David & Okazaki, 2006)

• Filipino Americans seek mental health services at much lower rates even when compared with other Asian-American groups (Gong, Gage & Tacata, 2003)

• 7 percent of Asian-Americans with psychological problems sought help, with 6 percent of them getting mental health treatment from a provider (US Department of Health and Human Services, 2001)