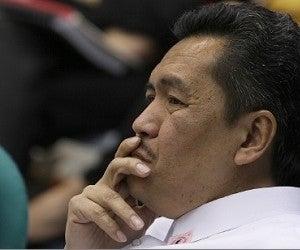 SEX FOR FLIGHT. Labor Attache Adam Musa of the Department of Foreign Affairs answers questions from the form the Senators during a public hearing on alleged sexual exploitation of Overseas Filipino Workers by certain embassy employees and officials posted in the Middle East. (PHOTO: Joseph Vidal/Prib)

Musa  went  under intense questioning by senators   after  28-year-old Grace Victoria Sales  told the Senate blue ribbon and labor committees  that  she had been sexually harassed by the labor attache’s driver, whom she identified as a certain  Jojo.

Jojo was an employee of the  Philippine Overseas  Labor Office  (POLO)  in Saudi.

It was Senate Minority  Leader Juan Ponce-Enrile who first snapped at  Musa  while asking the labor attaché  if he knew about the  attempted rape committed by his driver.

“Why are you  there in your post a  labor attache?”  Enrile asked to which Musa answered, “To ensure the  protection and the rights of the OFWs.”

Enrile  then  asked why  Musa  was  not able to  protect Sales, who was also working as a janitress in POLO, when the  driver allegedly tried to rape  her on August 21, 2012.

The senator also  pointed out the labor attaché’s failure to look for Sales, when  the latter  escaped  from  POLO after the incident.

Musa said that  after learning  about the incident, she immediately  conducted an internal investigation but could no longer contact Sales.

Not  satisfied by Musa’s  answers,  Enrile directed his questions to Labor Secreatary  Rosalinda Baldoz, who also attended the hearing.

“Is that the norm  of conduct that you expect from your labor attachés?” he asked.

“I’m sorry to say this but I think the impression that we’re getting is that your people were remised in the performance of their duties to protect our people,”  Enrile added.

Senator Jose “Jinggoy” Estrada also expressed dismay  that  the labor attaché was not able to protect the victim.

“You knew there was a problem. One of the functions a labor attaché is to promote and protect the general welfare of OFWs.  Am I correct? And you did not even go out of your way to look for Josie (The alias used by Sales). Instead, you just instructed your staff named Edith to talk to Ms. Josie,” Estrada said.

Edith Aquino  is the administrative  assistant in Polo, who was identified by Sales in her testimony as the person who contacted  her after she escaped  from  their office.

It was  Aquino, Sales said, who informed her that a disciplinary action would be  imposed against the driver and  that the latter’s three-month pay would be given to her.

Sales  said she was also told that the  10,000 riyal or an equivalent to more than P100,000 that she  got came from the labor attaché. But   Musa immediately  denied this.

“Hindi po galing sa bulsa ko yung pera. Bakit ko po bibigyan ng pera ng ganung halaga? (That money didn’t come from my own pocket. Why would I give her such amount of money?)” he said.

Responding to  Estrada’s queries,  Musa said he  no longer pursued  Sales because he was told that she was being assisted by critics of POLO.

Another reason, Musa said, was that it was not easy for them to move around because they were not recognized  by the host country.

“Every time we go out of Riyadh, we have to seek the permission of the host government,” he pointed out.

Senator Teofisto Guingona III, chairman of the blue ribbon committee, also  lost his temper because  of what he noted as inconsistencies in Musa’s statements.