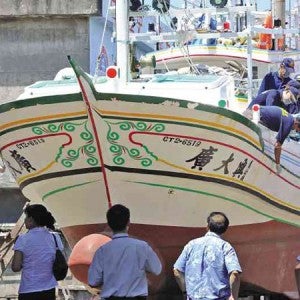 In this photo taken on May 29, NBI agents assisted by Taiwanese probers inspect the bullet-riddled fishing boat Guang Ta Hsin 28 at the Tungkang harbor in Taiwan. AFP

MANILA, Philippines—The Philippine Coast Guard “respects the findings of the National Bureau of Investigation” on the involvement of eight PCG personnel in the shooting death of a Taiwanese fishermen in northern Philippine waters in May, according to the PCG spokesperson.

At the same time, he said the Coast Guard, an agency attached to the Department of Transportation and Communications, “would extend legal assistance to our men.”

“No less than Rear Admiral Rodolfo Isorena (PCG commandant) made the assurance to the eight coast guards. He talked to them on Thursday, after a meeting at DOTC,” Balilo said as he also disclosed “some lawyers from the University of the Philippines and the University of Sto. Tomas have expressed willingness to help our men.”

He quoted Isorena as having said, “we should look at the problem as a good opportunity for PCG personnel to grow stronger, be more united.”

“If our men are found to have violated the Coast Guard rules of engagement, then they would have to face the consequences of their actions,” he added.

The coast guards had claimed the Taiwanese fishing boat Guan Ta Hsin 28 intruded into Philippine waters and refused to obey when they ordered it to stop.

Instead, the vessel tried to ram the Bureau of Fisheries and Aquatic Resources boat MCS 3001, forcing the PCG personnel to shoot it in self-defense, they said.

Although there were 17 coast guards on board the BFAR vessel, only eight fired directly at the Taiwanese boat, according to the NBI.