What Went Before: Public outrage in Taiwan over fisherman’s shooting death 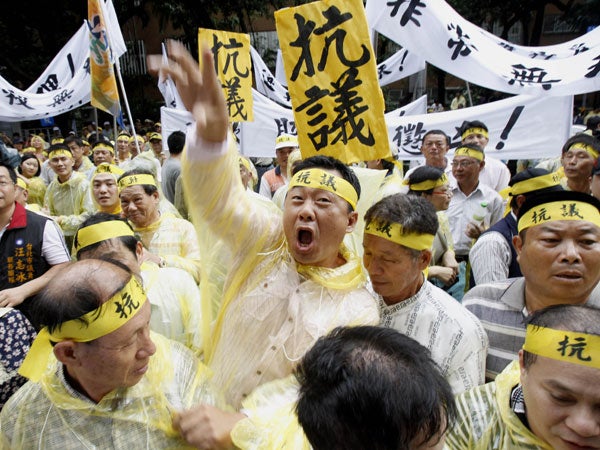 In a press briefing a day after the incident, the Philippine Coast Guard (PCG) admitted that its personnel fired on the Taiwanese fishing boat, which it said tried to ram the vessel that belonged to the Bureau of Fisheries and Aquatic Resources (BFAR).

But the agency refused to apologize for Hung’s death, saying the coast guards, who were on duty to stop poaching and illegal fishing, acted in self-defense.

Rear Adm. Rodolfo Isorena, PCG commandant, ordered an investigation and relieved 11 coast guards involved in the incident. Two BFAR employees were also relieved for the duration of the investigation.

On May 11, Taiwan President Ma Ying-jeou instructed its foreign ministry to demand a full investigation of the incident from the Philippine government. He also demanded a government apology for the killing of Hung, compensation for the fisherman’s family, the punishment of the coast guards involved in the shooting, and the opening of fishery talks between the two countries.

To pressure the Philippines to comply, Taipei took retaliatory measures against Manila, including a freeze on new jobs for Filipino migrant workers and suspension of tourist travel to the Philippines.

On May 15, presidential spokesman Edwin Lacierda told Palace reporters that President Aquino had asked Meco Chairman Amadeo Perez to convey “the Filipino people’s deep regret and apology” to the family of Hung “as well as to the people of Taiwan over the unfortunate and unintended loss of life.”

But the Taiwanese newspaper China Post reported that Premier Jiang Yi-huah was disappointed that Malacañang described the killing of Hung as “unfortunate” and “unintended.”

The public anger in Taiwan led to violent attacks against Filipino workers on the island, prompting government officials from both sides to call for calm. They also agreed to parallel investigations of the incident.

On May 16, a 14-member Taiwanese investigative team arrived in Manila to look into the killing. The group later said that the fisherman died from a single gunshot wound on the neck, and added that based on the evidence it gathered, Philippine law enforcers had the intent of murder as they were shooting at the crew of the fishing boat.

For its part, the National Bureau of Investigation sent a team of investigators to Taiwan to examine the fishing boat and interview the crew.

The Taiwanese probers later sat down with the NBI to compare notes of their findings.

Justice Secretary Leila de Lima assured the public that the findings of the Philippines would be independent from the Taiwanese investigation, and added that both sides had agreed not to prematurely disclose their findings.

On June 11, the NBI submitted its report to De Lima, who disclosed that the agency had recommended criminal and administrative charges against the coast guards involved in the incident.

De Lima forwarded the NBI report to President Aquino, saying it was up to him if he wanted to adopt the findings.

On June 14, representatives from the Philippines and Taiwan held a fishery meeting aimed at preventing the recurrence of violent confrontations in overlapping waters.—Inquirer Research